The Condors salute Condorstown native Jake Varner who took home a gold medal in freestyle wrestling at the London Olympic Games. Varner is a Bakersfield High School graduate and had to win four matches in a short, one-day span to take home the gold. 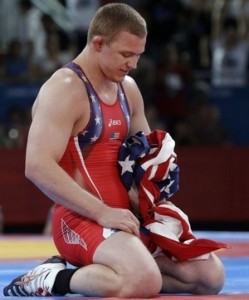 His accomplishments have brought pride to Bakersfield and the Condors are extremely proud of the way he represented the city and the United States at the games!

The team plans to formally congratulate him during the season at a game to be determined.

There is still time left to get in on your own OLYMPIC sized deal and bring home the gold medal yourself.

Don’t miss out on the team’s 15th anniversary season by purchasing your Olympic-sized ticket plan today. Until August 15th, any fan who purchases a new ticket plan will receive a Condors gold medal from Kern Trophies, a FREE family swim pass to the McMurtrey Aquatic Center, and a FREE one-month membership to Body Xchange. For more information, click here .

Ticket plans can be purchased in person at the Condors front office located inside Rabobank Arena or by calling 324-PUCK (7825).  To view the many options to fit your schedule and budget with plans starting at just $8 a month, click here .

CONDORS IN THE COMMUNITY: Condors at Back 2 School & Third Thursday ‘Last...
Scroll to top