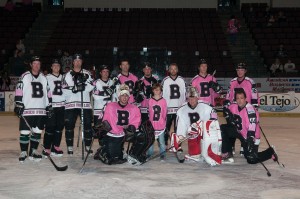 After former Condors/ Fog defenseman Kevin Barrett lost his mother to inflammatory breast cancer, he came up with the idea for the Hockey-Thon, an ice hockey marathon running around the clock in which local players could participate to raise money for charity.

Barrett joined forces with the Condors to create the Hockey-Thon, which is now in its 12th season and has been an overwhelming success, raising nearly $400,000 in the event’s history. This year, proceeds will benefit Bakersfield Relay for Life of the American Cancer Society.

The Hockey-Thon is comprised of a 5 on 5 tournament style hockey marathon for participants of all ages and skill levels, and is highlighted by a fun filled Condors Alumni game featuring former Condors wearing specially designed jerseys that will be silent auctioned during the following Condors game  all to benefit Bakersfield Relay for Life.

To participate in the Hockey-Thon, players can register by filling out the form below, then print out the donations sheet and begin collecting pledges to fight this noble cause. A minimum of $150 is required to play which includes a commemorative jersey and a ticket to the Condors game on Apr. 2.

NEW THIS YEAR! Can’t skate? Join us for the Broom Hockey portion of the event. $60 minimum to participate, which include a T-shirt and a ticket to the Condors game on Apr. 2.

The more you raise, the more you get!  For a complete breakdown, click on the link to the flyer below.

To participate in the Hockey-Thon, each player needs to raise a minimum of $150. All money must be turned in upon arrival at the Bakersfield Ice Sports Center, before you receive your commemorative jersey and in order to play. Checks should be made out to the Condors Community Foundation.

Don’t forget to select your League of play. There are many levels of play: Beginner, Intermediate, Experienced.

If you have any questions regarding what level you need to be in, or require any additional information, please contact Chase Hunter at chunter1045@yahoo.com