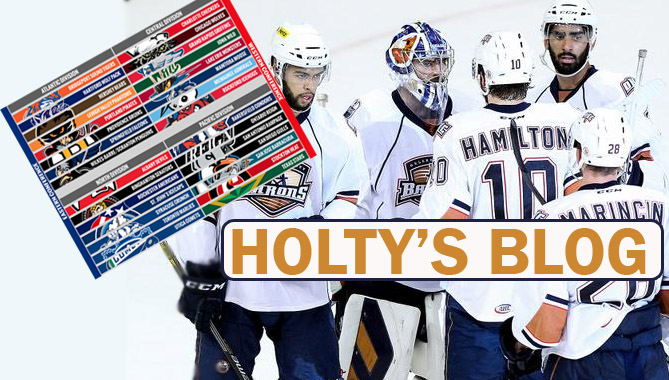 Just want to begin the blog by noting that of the eight finalists in the NHL and ECHL playoffs, I correctly picked two. TWO. And I went 0/4 in the NHL. So, clearly, I know the game.

A lot to get to today and there really is no rhyme or reason for the order of anything. I’d like to have a little more organization, but let’s face it, ain’t nobody got time for that. And, as I’ll remind you, it’s my blog, and I’ll do what I want.

First, we’re having an Oklahoma City-Utica Game 6 Watch Party Extravaganza on Monday at 4 p.m. inside the Convention Center. Doors will open 3:30 p.m. Why? Because we’re going to have game-worn jerseys, locker room stalls, locker rooms signs, and other items on sale for purchase. You can take home functional pieces of Condors history. Some items are perfect for kids rooms, toy chests, play rooms, or the ultimate man pad. First-come, first serve. Oh, and then watch some potential future Condors continue their quest for a Calder Cup.

So last week we talked about who should be the Condors “California” rival in the upcoming 2015-16 AHL campaign. And then, two days ago the American Hockey League announced the divisional alignment for the season. Joining the “California-5” are the two Texas teams, the Texas Stars, based in Austin, and the San Antonio Rampage to form a 7-team Pacific Division.

As I tweeted when it was announced, that means the top teams for the Oilers, Flames, Sharks, Ducks, Kings, Stars, and Avalanche are all going to be in the same division. Not only that, but many other NHL Western Conference foes are in the 8-team Central Division of the AHL Western Conference. It’s going to make for some great matchups at the AHL level and let’s be honest, some great road trips. I think Austin/San Antonio will fit in just fine to fill the void left by Boise.

The playoff format will be announced later this summer after the Board of Governors summer meeting in Hilton Head, S.C. and the schedule will be released later on this summer. Why does the AHL schedule come out later than Condors fans are typically accustomed to marking their calendars? Some teams, San Antonio is one of them, play in NBA buildings and have to wait for their schedule to be released before they are able to lock in.

Speaking of those potential future Condors… Oklahoma City had a pretty decent night last night, winning 7-4 and evening the series at 2-2. Darnell Nurse, who joined the team last week and played his first game, had three assists.


And how about Leon Draisaitl? He scored the game-winner, took home playoff MVP honors, and led the Kelowna Rockets to a Memorial Cup berth. That’s the final four in all of Canadian junior hockey for those unaware.


That’s all I have. Demolition is going on down in the arena as we speak. Certainly exciting times for Oil Country and Condorstown. I’m just hoping they don’t demolish my office when I go down to San Diego on Tuesday to interview potential employees.

Ryan Holt enters his 5th season with the Condors in 2015-16. His Preakness pick? American Pharaoh. Only because he will be at Santa Anita on Belmont Day and the atmosphere would be better if the Triple Crown was still in play. Follow him on Twitter @CondorsHolty for other nonsense or send him blog ideas or comments to rholt@bakersfieldcondors.com