In a season of change and moving parts, D Erik Burgdoerfer was one of the few constants on the 2011-12 Condors squad. Playing in just his 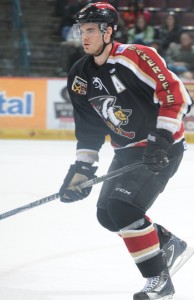 second full professional season, the East Setauket, NY native was thrust into a veteran role as one of just two returning Condors from the 2010-11 season and the only one to finish the season in Condorstown.

Burgdoerfer embraced the leadership position as an alternate captain, often played injured, and proved his reliability on the blue line in all situations to new head coach Matt O’Dette. He led the team’s defensive corps in shots with 120 despite playing in just 60 of the team’s 72 games after missing time at the beginning of the season due to a hand injury. Overall, the second year pro finished with five goals and 11 assists for 16 points.

Followon TwitterSubscribeto RSS Feed
How About the OTHER Leagues? (Holty’s Blog)

Checking in with … #24 Evan Trupp
Scroll to top