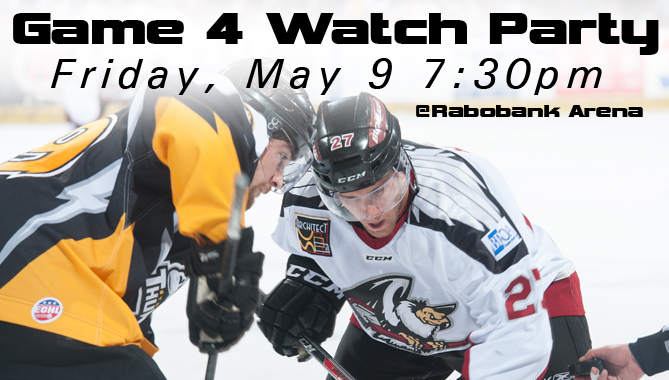 CONDORSTOWN, Calif. – The Bakersfield Condors, owned by the Edmonton Oilers, head north up Highway 99 this week to resume their Western Conference Semifinal series with the Stockton Thunder. Bakersfield leads the best-of-seven series, two games to none.

The Condors invite fans to join us at Rabobank Arena Friday night for a special Watch Party for Game 4, as we play the game on the Jumbotron, complete with the broadcast of Ryan Holt on the speaker system.

Doors will open at 6:30 p.m. and the puck drops at 7:30 p.m. Admission is the donation of two (2) non-perishable food items. The food will be donated to the Golden Empire Gleaners. Several of the concession stands will be open on the concourse to provide food and drink options. The Club Room and Tap Room will both be open as well, showing other games of interest for fans to stay updated on.

So throw on your Condors gear, come on down to Rabobank Arena for the Watch Party, and make some noise for your Condors, loud enough to hear all the way up the Central Valley to Stockton.

Followon TwitterSubscribeto RSS Feed
Make sure you don’t miss any of the action!

Hey, tell me about how I can see the games this week on that internet site&...
Scroll to top