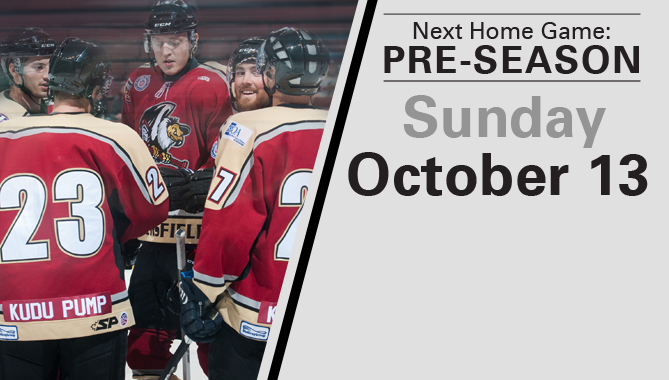 The Bakersfield Condors play their final preseason game of the 2013 docket, looking to remain unbeaten. Bakersfield is 1-0-1-0 in two preseason contests. This is the second meeting between the two sides this preseason after the Condors took a 3-2 victory at Cow Palace on Thursday night.

The Condors had a 3-1 lead in Stockton on Friday night, but could not hang on and fell in overtime, 4-3, at Stockton Arena. C Joel Broda score his first goal since returning to Condorstown and F Jake Morley potted his first of the preseason as well.

San Francisco comes off a 4-3 home shootout loss to the Thunder last night. D Ryan McDonough scored twice in defeat.
THE SERIES
The Condors will take on the Bulls a total of 11 times during the regular season, including six times at Rabobank Arena. In a scheduling quirk, the teams will play a three-in-three from Feb. 20 – Feb. 22 with the first two meetings at Cow Palace and the series finale in Condorstown. Bakersfield was the first-ever opponent of San Francisco when the teams opened the 2012-13 regular season, a game won by the Condors. Overall, Bakersfield is 5-7-0-0 against their intrastate rivals.
CONDORS NOTES
The Condors are led by first year Head Coach Troy Mann…Joining him on the staff are Assistant Coach Ryan Murphy and part-time Assistant Coach Paul Willett…New this season, the Condors are the ECHL affiliate of the National Hockey League’s Edmonton Oilers and the American Hockey League’s Oklahoma City Barons…C Nicholas Tremblay, G Tyler Bunz, F Cameron Abney, and D Joey Leach have all been assigned to Bakersfield from either Edmonton or Oklahoma City
TRANSACTIONS
10/13 – F Travis Ouellette released (contract)
10/13 – F Simon Mitman released (tryout)
10/13 – F Mike Hellyer released (contract)
10/13 – F Ivo Crhak released (tryout)
10/13 – D Nick Wheeler released (tryout)