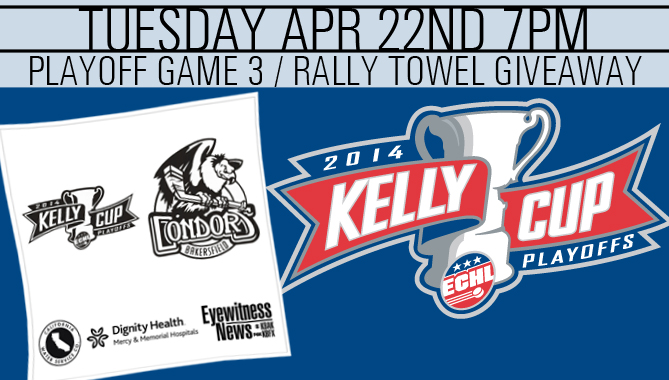 TONIGHT
The Bakersfield Condors host the Utah Grizzlies for game three of their best-of-seven Kelly Cup Quarterfinals series. Both teams picked up a win in Utah over the weekend and the series is tied at one game apiece. It is the first playoff series between the two teams in their history.

IN CASE YOU MISSED IT
Game one: LW Andrew Carroll tipped in a shot from D Erik Burgdoerfer 4:59 into the third period, and it held up as the Condors blanked Utah, 1-0. G Laurent Brossoit, who had eigh

t shutouts in the regular season tying an ECHL single-season record, began his professional postseason career with a 26-save shutout.

Game two: C Gary Steffes got the Condors on the board on the first shift of the game, scooping up a puck in the left-wing circle and snapping it over the shoulder of G Aaron Dell. However, the Condors could not convert on five power plays in the game, and Utah tallied in each of the final two periods en route to a 2-1 win. D Teigan Zahn and C Michael Pelech had the goals for the Grizzlies as Dell earned his first postseason win for Utah with a 24 save performance.

CONDORS NOTES
The shutout from G Laurent Brossoit was just the third postseason shutout in the Condors 16-year history. His .965 postseason sv% is second among ECHL goalies .. Bakersfield’s “Grind Line” of LW Andrew Carroll – C Gary Steffes – RW Ryan Little has both goals in the series for the Condors. Carroll has points in both games (1g-1a)… After leading the Condors in the regular season in plus-minus at +17, Little is tied for the team plus-minus lead after two games at +2… The Condors have been without C Matt Thurber, who had 42 points (11g-31a) in the regular season, due to injury.