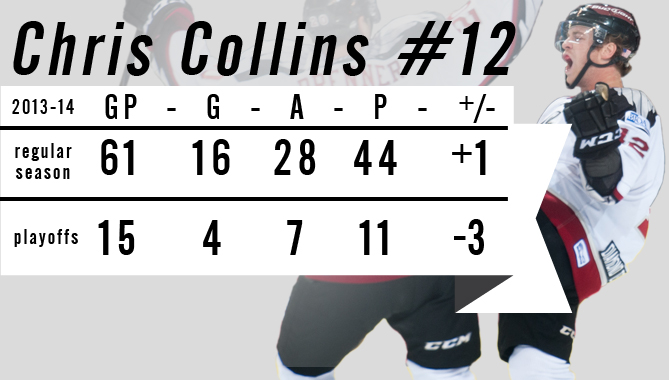 Chris Collins came to Condorstown looking to use his veteran experience to help show the way for a relatively young Condors squad. The Fairport, NY  native knew his surroundings, having played in Long Beach as a rookie. He also knew the coaching staff. Assistant Coach Ryan Murphy was a teammate of his at Boston College’s and Head Coach Troy Mann knew #12 from his days in Wilkes-Barre when he faced Mann’s Hershey Bears often.

In the regular season, Collins finished t-3rd in scoring with 44 points and led the team in shots with 185. He earned an AHL call-up in March to Norfolk.

The postseason proved Collins’ experience and worth to the team. Battling through injury, Collins was second on the team in assists with seven and third in scoring with 11 points in 15 games.