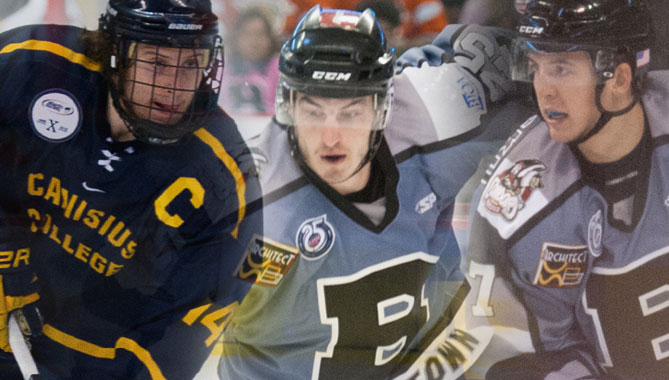 CONDORSTOWN, Calif. – The Bakersfield Condors, ECHL affiliate of the Edmonton Oilers, announced today that the team has agreed to terms with D Art Bidlevskii, LW Jake Morley, and F Preston Shupe for the 2013-14 season. The Condors now have seven players on the team’s training camp roster.

the South Carolina Stingrays on March 7, 2013. Last season, as a rookie splitting time between the Stingrays and Condors, Bidlevskii had five points (2g-3a) to go along with 123 penalty minutes in 54 games. At the time of the trade, the Kelowna, British Columbia native led the Stingrays in penalty minutes. He tacked on 20 PIMs, along with a goal, in 10 games with Bakersfield.

The 6’0″, 190 lbs. blue-liner began his professional career in 2010-11 in the American Hockey League (AHL), playing 10 games with the Bridgeport Sound Tigers, but returned to finish out his junior career with the Regina Pats in 2011-12. He racked up 636 penalty minutes in 316 Western Hockey League (WHL) games with Prince George and Regina.

“I love the city, the first-class facilities, and playing in California,” Bidlevskii said. “Going into this season, I know more about the pro schedule and what I need to do day in and day out to be consistent and play on an even keel. I want to play physical every shift, shut down their top lines, and stick up for my teammates when needed.”

Morley, 25, enters his second professional season after playing in

the ECHL with Bakersfield and Idaho, and the Central Hockey League (CHL) with Fort Worth last season. Combined, Morley played 59 games during his rookie season with three goals and 18 assists for 21 points. With the Condors, Morley (2g-9a) tallied 11 points in 23 games as he played a physical role on the Condors “Clarkson” line with C Nicholas Tremblay and RW Scott Freeman.

At Clarkson, Morley had 50 points (20g-30a) in 137 games, serving as a captain his senior season before turning pro in 2011-12 with Springfield (AHL) where he played three games.
“Really looking forward to get back to Bakersfield since the new staff is really focused on winning,” Morley said. “There’s a great fan base, I feel more prepared for the speed of the game, and I’m looking to get on the stat sheet more often.”

Shupe (SHOOP), 24, enters his rookie season coming off a career-year as he

helped lead Canisius College to their first-ever Atlantic Hockey Association title and NCAA Tournament berth in 2012-13. Wearing the “C” for the Golden Griffins last season, Shupe appeared in all 43 games setting career-highs in goals (16) and points (29) which ranked second on the team. He led the Griffs in game-winning goals with four, as he capped his career with 38 goals and 48 assists for 86 points in 142 games. The 6’1″, 200 lbs. forward joins D Kyle Haines as the second native of Weyburn, Saskatchewan on the roster, a town of roughly 10,000 people.

“During the recruiting process, it was clear Bakersfield was a good fit for me since Troy (Mann) and John (Olver) are proven winners,” Shupe said. “I’m good friends with Kyle (Haines) and he had nothing but great things to say about the city, the fans, and the facilities. Fans can expect me to give everything I’ve got every night and do whatever is needed to succeed.”

“Art is a big, strong kid who has the ability to be a shut down defenseman for us,” said Condors Head Coach Troy Mann. “Jake can play a strong two-way game, has high character, and brings a tremendous work ethic. Preston is coming off a big year in college last season, was a captain for his team, and came highly recommended from his college coach Dave Smith. We’re looking forward to seeing what he can do this season.”

Click here to pre-order your jersey today or come by the office, see the jerseys, and place your order in person!

Save The Dates: Open House and Preseason Announced

Do not miss your first opportunities to meet the 2013-14 Condors at the Annual Open House/Black-White Game and the Preseason game, both at Rabobank Arena.

Don’t miss Opening Night when the Condors host the Colorado Eagles on Friday Oct. 18! Ticket packages are on sale now for the 2013-14 season. Click here or call 324-PUCK (7825) for more information.

Best ways to use your season tickets, #7: Thank someone who has given you helpful advice.

Followon TwitterSubscribeto RSS Feed
Condors in the Community: Night Out Against Crime and Valley Fever Walk