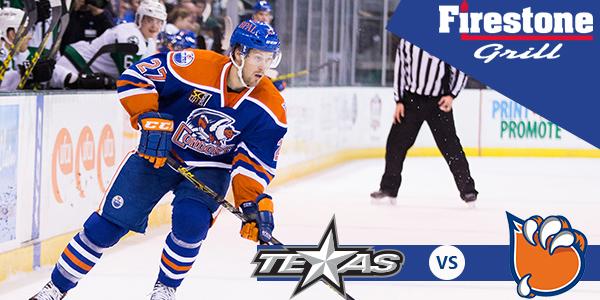 TONIGHT
The Bakersfield Condors play game two of a five-game homstand tonight against the Texas Stars. Both teams saw long winning streaks end last night as Texas had a six-game streak snapped in Ontario and the Condors lost at home to San Diego, ending a five-game run. Bakersfield is in search of their first victory against the Stars this season as Texas has opened with four straight wins. The season series concludes in Cedar Park on March 29.

IN CASE YOU MISSED IT
Bakersfield fell behind 3-0, but mounted a charge last night in a 3-2 loss to San Diego. C Josh Winquist returned to the lineup and recorded a multi-point game with a goal and assist. RW Andrew Miller’s third period goal cut the lead to one, but the Condors could not find the equalizer.

Texas was outscored 3-0 in the third period in Ontario last night and fell 4-1. G Maxime Lagace took the loss, making 31 saves on 34 shots. C Jason Dickinson potted his 16th goal of the season to equalize before the second intermission.

22 GAMES REMAIN; THREE TEAMS TIED FOR FINAL PLAYOFF SPOT
With 22 games remaining, there is a three-way tie in the Pacific Division for the final guaranteed playoff spot. Bakersfield, San Diego, and San Jose each have 50 points (.543%) through 46 games with each playing 68 games this season. Bakersfield would win the tiebreaker by virtue of their 22 ROW (regulation+overtime wins). San Diego has 20 and San Jose has 18. If the playoffs started today, Charlotte would hold the crossover spot and slot fourth in the Pacific by virtue of their .559 point percentage. San Diego hosts Ontario tonight while San Jose visits Stockton.

CONDORS NOTES
LW Luke Gazdic played 256 games with the Stars over four seasons. His best season came in 2011-12 when he notched 11 goals, 12 assists, and 23 points to go along with 102 penalty minutes… RW Andrew Miller has 10 points over a five-game scoring streak (3g-7a)… LW Rob Klinkhammer has six points in four games (4g-2a) including an assist last night.

STARS NOTES
Texas was without their leading scorer, C Travis Morin, and their leading goal-scorer, C Greg Rallo, last night in Ontario. Morin has seven points (3g-4a) in his last six games… The Stars have the most road wins in the Western Conference with a 16-12-1-3 record away from Cedar Park Center… C Jason Dickinson has vaulted to second in the rookie scoring race wiht 40 points (16g-24a) in 54 games. He is three behind Rampage winger Mikko Rantanen… D Julius Honka is t-4th in the AHL among d-men in scoring with 34 points (9g-25a) in 55 games.

Texas holds off the Condors, 4-2
Scroll to top