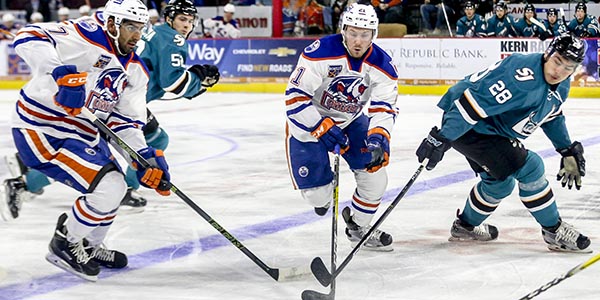 CONDORSTOWN, Calif. – The Bakersfield Condors (6-7-0-0, .462) broke their short two-game losing streak in a stirring victory over the San Jose Barracuda (5-5-0-2, .455) Tuesday night at Rabobank Arena. Captain Ryan Hamilton led the way, posting 1g-1a after taking a puck to the face and missing most of the first period. Goaltender Laurent Brossoit made a 37 stops on the night.

GAME NOTES
CONDORS COLLECTION NIGHT, TEDDY BEAR TOSS THIS SATURDAY
The Saturday after Thanksgiving is the legendary Condors Teddy Bear Toss, sponsored by Eyewitness News, KERN 1180/96.1 and Three-Way Chevrolet-Cadillac. Bring a stuffed animal to the game and when the Condors score their first goal against the San Diego Gulls, throw them onto the ice. The bears will be collected by United Way and distributed throughout the county.