PROMOTION: SPCA dog adoptions on the plaza and concourse for Pet Awareness Night; first 1,000 fans 12 and under get a Secret Life of Pets backpack clip; win a custom dog bowl painted by Condors players; welcome fans to bring dog/cat food to the game for donation to SPCA. It’s also Blaze Night, get 2-for-1 admission by wearing Blaze gear; Blaze game jersey and batting helmet to be raffled off 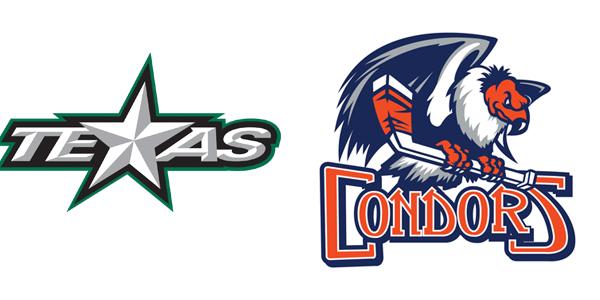 TONIGHT
The Bakersfield Condors play game two of an eight-game homestand against the Texas Stars. It is the first meeting of six between the two sides this season. Last year, Texas swept the season series, going 6-0-0 against Bakersfield.IN CASE YOU MISSED IT
Bakersfield routed San Antonio, 7-1, on Wednesday night at Rabobank Arena. Six different Condors lit the lamp, including RW Taylor Beck who scored twice and added an assist for the team’s first three-point game of the season. G Laurent Brossoit made 36 saves on 37 shots for his first victory of the season.Texas comes to town off a 4-3 overtime win in Tucson against the Roadrunners on Wednesday night. C Jason Dickinson scored the game-winner 3:51 into the extra session. G Phillipe Desrosiers picked up the win, stopping 19 of 22 shots.

CONDORS NOTES
D Mark Fraser was a season-high +4 on Wednesday… G Laurent Brossoit stopped a season-high 16 shots in a period… C Jujhar Khaira has points in every game he has played this season. In the four games, the Surrey, BC native has seven points (4g-3a)… RW Joey Benik is t-5th in rookie goal scoring with three on the season. He is second among rookies in shooting percentage with three goals on nine shots (33.3%).

FUNNEST 3-PACK EVER – PUBLIC CAN BUY OUTDOOR CLASSIC TICKETS NOW!
Youth Jersey $5 Frenzy, Teddy Bear Toss, and the Three-Way Chevrolet Condorstown Outdoor Classic pres. by Mission Bank all for just $56? The Funnest 3-Pack Ever is the only way to get the best seats to three of the biggest games of the year!
Get this deal now and book your seat for three HUGE games this season. Call 324-PUCK (7825) orclick here for more information.
https://www.bakersfieldcondors.com/wp-content/uploads/2016/11/Condors_Texas_Preview.jpg 300 600 condors /wp-content/uploads/2022/08/WebSite-Top-Bar-1.png condors2016-11-04 13:15:382016-11-04 13:28:55Condors host Texas on Pet Awareness Night