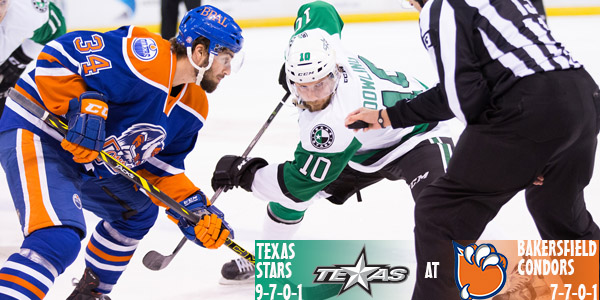 TONIGHT
The Bakersfield Condors return home for their fourth game in seven nights to take on the Texas Stars. It is the third meeting of the season and the first at Rabobank Arena. The Stars took the opening two games of the season series in Austin by scores of 5-4 and 4-2. In both contests, the Condors held two-goal leads.

IN CASE YOU MISSED IT
The Condors have won five of their last seven to get back to .500 in the tightly-contested Pacific Division. Over the weekend, Bakersfield won 2-1 in Manitoba in the series opener, before the Moose responded with a 3-1 win on Sunday to split the series. G Laurent Brossoit got the start both games and holds a 5-1-0 record in the month of November. Friday night, C Alexis Loiseau scored his first AHL goal, which turned out to be the game winner, while on Sunday RW Anton Slepyshev scored his first goal in North America since coming over from the KHL (Russia).

Texas is 1-4-0 in their last five, but split a two-game set on the weekend at home. Friday night, six different players found the back of the net and G John Muse made 27 saves in a 6-2 win over the Charlotte Checkers. Saturday night, Texas trailed 6-3 in the 2nd period, but stormed back to even the score 6-6 with Ontario, before a late goal from the Reign did them in, 7-6.

JONES SIGNED TO A PTO
LW Kellen Jones was signed to a PTO by the Condors yesterday. The Montrose, BC native had 15 points (5g-10a) in 49 games with the Oklahoma City Barons last season and three points (1g-2a) in 10 Calder Cup playoff games. Before getting the call-up to OKC, Jones was a fixture on Bakersfield ‘s (ECHL) top line notching seven goals and 18 assists for 25 points in 27 games. This season, Jones was the third-leading scorer on the Missouri Mavericks (ECHL) with four goals and 13 assists for 17 points in 16 games. He becomes the second player signed to a PTO in the last week as C Josh Currie joined the team on Nov. 17.

CONDORS NOTES
Bakersfield has allowed just 2.00 goals against/game over their last seven games and it has led to five victories. Only twice has the team allowed more than two goals over that stretch… The Condors have been hit by the injury and illness bug with six players currently out injured necessitating four call-ups from Norfolk and two recent PTO signings. Bakersfield was also without RW Matthew Ford over the weekend due to a two-game suspension, but he returns from that this evening.

STARS NOTES
Texas plays game one of a four-game California road trip tonight. Tomorrow, they are in San Diego before heading up to take on the Barracuda on Saturday and Sunday… C Devin Shore had four points (1g-3a) in the 7-6 loss on Saturday night… C Travis Morin is the only player to skate in all seven seasons with the Stars… C Greg Rallo is one point shy of 300 for his AHL career… Texas started 4-0-1 on the road, but have lost their last three games away from Cedar Park Center.