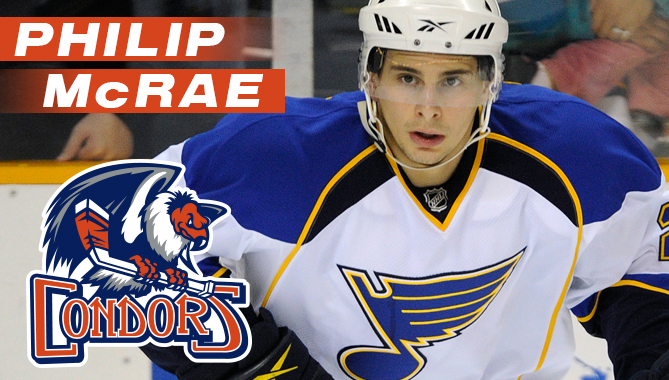 CONDORSTOWN, Calif. – The Bakersfield Condors, owned by the Edmonton Oilers, announced today that C Philip McRae has been signed to an American Hockey League (AHL) contract. The 25-year old spent last season with the Chicago Wolves (affiliate of the St. Louis Blues) in the AHL.
DOWNLOAD: Current Roster // WATCH: McRae Highlights
McRAE – stats // 25 years old // 6’2″ // 196 lbs. // Apple Valley, Minnesota
With 297 games played at the AHL level or higher, McRae qualifies as a “veteran exempt” for the 2015-16 season. AHL teams are allowed to dress a maximum of six veterans per game – five veterans and one veteran exempt. A veteran is anyone who has played in 260+ games at the AHL (and qualifying European leagues) or higher. A veteran exempt is a player who has played between 260 and 320 games entering a season.
NHL PRESEASON GAME IN BAKERSFIELD – MONDAY, SEPT. 21
The Arizona Coyotes and Los Angeles Kings will play an NHL preseason game at Rabobank Arena on Monday, Sept. 21 at 7 p.m. Tickets are on sale now at the Rabobank Arena box office or online by clicking here.
BE A PART OF HISTORY!! – CONDORS OPENING NIGHT SATURDAY, OCT. 10
Join the Condors on their historic move to the American Hockey League in 2015-16. Become a ticket member and enjoy all of the great benefits by contacting the Condors at 324-PUCK (7825) orclick here for more information.