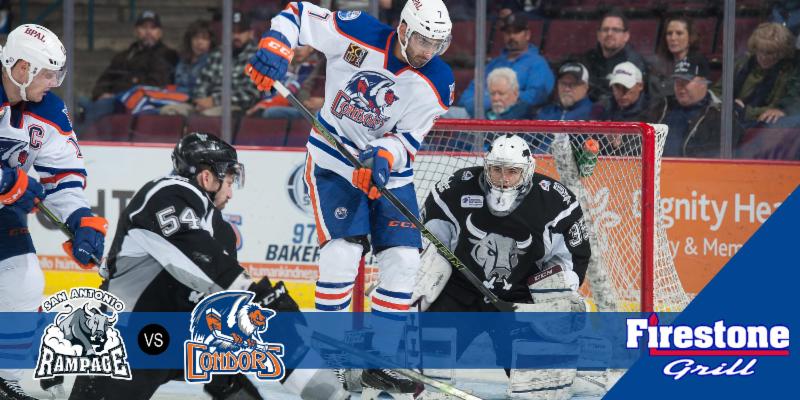 IN CASE YOU MISSED IT
Bakersfield struck first and led after one period, both typically signs of a Condors win, but the San Jose Barracuda erased two deficits and struck late in a 4-3 win. LW Rob Klinkhammer had a goal to extend his point streak to seven games. D Dillon Simpson (1g-1a) and RW Tyler Pitlick (1g-1a) each had multi-point nights. G Eetu Laurikainen got the start and made 30 saves on 34 shots.

San Antonio fell to San Diego, 5-1, last night. C Joey Hishon returned to the lineup and had the lone goal for the Rampage. G Reto Berra made his third straight start since being assigned by Colorado.

TEXAS-SIZED ROAD TRIP
San Antonio is in the midst of an 11-game road trip spanning from coast-to-coast. What began on Feb. 6 in Cedar Park will finish tomorrow in Stockton and traverse three time zones. The Rampage are 3-5-1 on the trip which is an annual occurrance with the rodeo taking over the AT&T Center. After this weekend, San Anotino heads home on March 4 to take on the Manitoba Moose.

GOALIE SWAP
Earlier today G Anders Nilsson was traded to the St. Louis Blues in exchange for G Niklas Lundstrom and a 2016 fifth round draft pick. As a result, G Laurent Brossoit was recalled by the Edmonton Oilers and G Ty Rimmer was summoned from Norfolk to Bakersfield.

CONDORS NOTES
RW Tyler Pitlick’s multi-point night was his fourth this season… LW Rob Klinkhammer is currently on a seven-game point streak with six goals and four assists for 10 points in that span… G Ty Rimmer won his only start with the Condors this season on Dec. 26 (5-3 v Stockton)… Bakersfield lost for the first time when leading after one period at home (10-1-0-0).

RAMPAGE NOTES
C Mikko Rantanen leads the AHL in rookie scoring with 46 points (19g-27a) in 37 games. He has scored four goals in his last two games against the Condors… D Maxim Noreau is third among blueliners in scoring with 36 points (10g-26a) in 46 games. He leads all d-men with seven power-play goals.