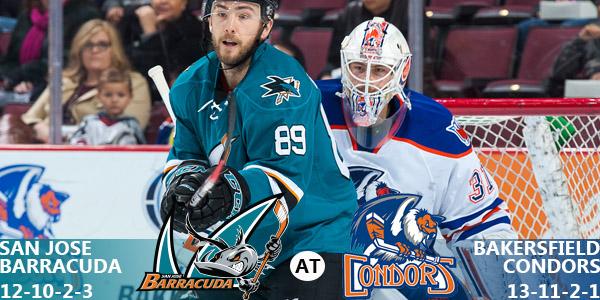 The Bakersfield Condors open up 2016 with their 5th meeting of the season against the San Jose Barracuda. Bakersfield owns a 2-1-1-0 record against the Barracuda with the last two contests extending past regulation. In the last outing, the Condors erased a 4-1 deficit and three total in regulation to earn a point in a 7-6 loss at San Jose on Dec. 5.
IN CASE YOU MISSED IT
Bakersfield took a 2-0 lead after 40 minutes of play and won 4-1 on Sunday at home against San Diego. LW Ryan Hamilton, C Andrew Miller, and RW Matthew Ford each recorded 1g-2a nights, combining for nine points on the team’s top line. D David Musil tacked on the other tally, his third of the season. G Laurent Brossoit got his first start since Dec. 4 and made 27 saves in the victory.
San Jose received 31 saves from G Aaron Dell, including three in a shootout, to take a 3-2 decision on Wednesday afternoon at SAP Center. LW Micheal Haley scored for the second consecutive game.
KASSIAN COMES TO CONDORSTOWN
RW Zack Kassian joined the Condors this week after being acquired by the Oilers from the Montreal Canadiens on Monday. The former firsr round draft pick (#13 overall) in 2009 by Buffalo, has played 198 games in the NHL for the Sabres and Vancouver Canucks with over 300 penalty minutes. Kassian won a Memorial Cup with Windsor in 2010 and a World Junior Championships Silver Medal with Canada in 2011. He was named to the AHL All-Star Team as a rookie in 2011-12 with Rochester.
CONDORS NOTES
Bakersfield went 5-2-2 in the month of December and a perfect 4-0-0-0 on home ice to close out 2015… RW Matthew Ford rides a season-high five-game point streak (4g-3a) into tonight’s game. He had a point in all but one game in December (9 GP, 7g-4a-11pts)… G Laurent Brossoit is 8-2-0 in his last 10 starts and 8-2-1 in his last 11 appearances. He returned to action on Sunday in a 4-1 victory over San Diego after missing 22 days with injury… The Condors are 12-4-2-0 when scoring the game’s first goal… D Nikita Nikitin returned from the Edmonton Oilers on Thursday. He had one assist in seven games with the Oilers and resumes a five-game scoring streak (1g-6a) he had when he was recalled on Dec. 10.
BARRACUDA NOTES
San Jose is in the midst of a stretch of 13 of 16 on home ice between Nov. 28 and Jan. 10. They have won three of four and are 3-1-2-0 in their last six games. The Barracuda have a better road record (5-3-2-0) than home record (7-7-0-1)… RW Ryan Carpenter is t-4th in assists among AHL skaters with 20… The Barracuda added F Jesse Mychan yesterday. He had 22 points (13g-9a) in 25 games with the Colorado Eagles (ECHL).
TRANSACTIONS
12/31 D Nikita Nikitin assigned by Edmonton (NHL)
12/30 G Ty Rimmer assigned to Norfolk (ECHL)
12/28 RW Zack Kassian assigned by Edmonton (NHL)
12/28 G Eetu Laurikainen assigned by Edmonton (NHL)
12/28 G Ben Scrivens traded to Montreal (NHL) 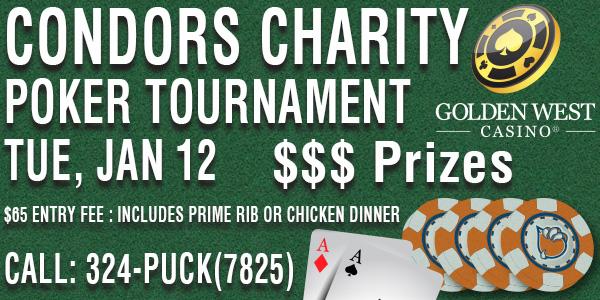 Ford scores twice as Condors get point
Scroll to top