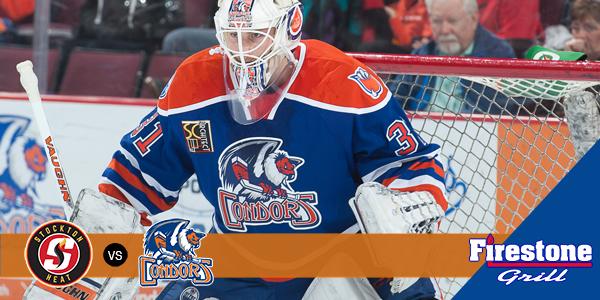 TONIGHT
The Bakersfield Condors host the Stockton Heat for the 12th and final meeting of the regular season. It is the final home game for the Condors who hit the road for two games in Milwaukee (Fri.) and Grand Rapids (Sat.). Bakersfield is 6-4-1 against the rivals from up the 99, and are 2-0-1 in their last three home games against the Heat.

IN CASE YOU MISSED IT
Bakersfield opened the scoring on their first shot of the game and had a 2-1 lead in the second period, but the Ontario Reign scored twice in the third to break a 2-2 tie and take a 4-2 victory on Saturday. The Condors were led by C Josh Currie who had a goal and an assist. RW Marco Roy dished out two assists for his first multi-point game with Bakersfield.

Stockton stayed in the playoff hunt with an overtime victory on Sunday at home against San Diego. RW Freddie Hamilton scored in the extra session to keep the Heat’ playoff hopes alive. D Tyler Wotherspoon had two assists and was +2 in the victory. Rookie G Nick Schneider made 22 saves of 26 shots for the win.

REINFORCEMENTS COME FROM EDMONTON
Though the Condors were mathematically eliminated from playoff contention with Saturday’s loss, the Edmonton Oilers assigned four players to Bakersfield for the final week of the regular season. G Laurent Brossoit, the Condors leader in wins with 15, returns to Bakersfield after making five starts with the Oilers. Joining him, D Darnell Nurse returns to Bakersfield for the first time since early November; D Griffin Reinhart and D Jordan Oesterle, who were paired together for much of their Oilers stint, also were assigned.

CONDORS NOTES
The Condors are guaranteed a winning record at home with a 16-13-3-1 mark at Rabobank Arena. Bakersfield’s attendance has grown over 7% from a season ago, and the team will once again average over 5,000 fans a game… The Condors have scored 12 shorthanded goals this season; only two teams have more in the AHL… D Brad Hunt is tied for the league lead among d-men with eight power-play goals… RW Matthew Ford has 26 goals this season, his most for one team, in one season, since 2010-11 with Lake Erie. Ford’s career high for one season is 29 set in 2011-12 with Hershey and Adirondack.

HEAT NOTES
Stockton needs to win its final three games of the season to have any shot at the postseason. They trail San Jose by five points and Charlotte by six points essentially. Any point dropped by the Heat or gained by the Checkers would eliminate Stockton from contention… Former Edmonton Oil Kings F Brett Pollock scored his first pro goal on Sunday. He led the Oil Kings in goals and points this season… D Pat Sieloff scored a goal in his NHL debut on Saturday with Calgary on an assist from fellow debutant F Turner Elson.