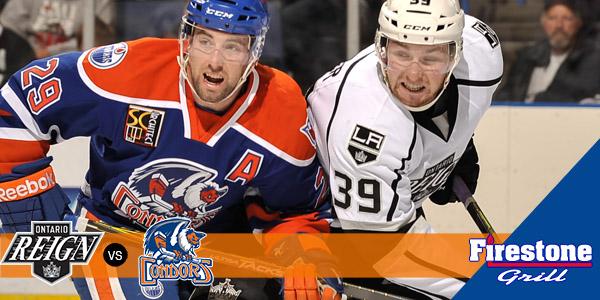 BUY TICKETS: Click Here
WATCH: Condors Countdown w/ Gerry Fleming
TIME: 7 p.m. (Doors open at 5:45 for members / 6 p.m. for general public)
PROMOTION: KEVIN HARVICK NIGHT presented by Eyewitness News, 107.9 KUZZ Radio, and Budweiser. 2-for-1 Tickets deal include: if you wear Harvick apparel, if you live in the 93308 zip code, if you attend or graduated from North High, if your name is Kevin, if your last name is Harvick, or if you live on any street named for a track Kevin has won a cup race.
BROADCAST: Video (AHL Live) |  Radio (Fox Sports 970 AM) | MOBILE (iHeartRadio App – Fox Sports 970)
What’s for dinner?:  Tap Room – BBQ Beef Sliders, Chippers, Dinner Salad // Club Room – Taco Tuesday: Marinated Steak and Chicken, Chimichurri Sauce, Beans and Rice, Ensalada Fresca, Buenelos // Check out the arena concessions amenities map // Firestone Grill – looking for a a great spot for a pregame meal before heading to the game? Check out Firestone Grill at 3501 California Ave., just outside of downtown Bakersfield

TONIGHT
The Bakersfield Condors host the Ontario Reign for their final home game in March. Bakersfield owns a 4-3-1-0 record against the division-leading Reign and have won the last three meetings. Ontario will be the Condors’ opponent in four of their final 11 games, most of any team.

IN CASE YOU MISSED IT
The Condors extended their point streak to five games in a 6-5 overtime loss to Stockton. It was just the second time this season in which the Condors failed to win when leading after two pweriods (22-0-2). Bakersfield received a Gordie Howe Hat Trick from LW Ryan Hamilton with a goal, assist, and fight.

Ontario saw their eight-game point streak (7-0-1) end on Saturday at the hands of the San Diego Gulls, 4-1. D Derek Forbort scored the lone goal for the Reign as G Peter Budaj stopped 24 of 27 shots in the loss.

PLAYOFF PICTURE
With 11 games remaining in the regular season, the Condors currently sit two points behind San Jose for the fourth and final playoff spot in the Pacific Division. Bakersfield has a game in hand, which they will play tonight against Ontario. Charlotte, who is wedged between the two teams with a .546 points percentage, is in Chicago on Wednesday and Manitoba on Saturday/Monday. San Jose hosts San Diego on Saturday and Sunday.

CONDORS NOTES
RW Anton Slepyshev has a five-game point streak (3g-3a)… LW Ryan Hamilton has goals in four games (4g-1a)… After being held without a point in his first three games, RW Zach Boychuk has back-to-back, multi-point games (2g-2a)… LW Kale Kessy was suspended for tonight’s game after accumulating three game misconducts this season. C Jujhar Khaira is set to return from suspension tonight after being held out a game on Saturday for a match penalty on Friday in San Diego.

REIGN NOTES
RW Sean Backman is 13th in the AHL scoring race with 51 points (19g-32a) and leads the league with 214 shots… G Peter Budaj leads the AHL in wins (35), goals-against average (1.70), shutouts (8), and is third in save percentage (.930)… Ontario is 27-0-1 when scoring first. They and San Diego are the only teams in the AHL to have not lost in regualtion when scoring the opening goal of a game.