Blog - Latest News
CONDORSTOWN, Calif. – The Bakersfield Condors host the San Diego Gulls on Dignity Health Home Ice at Rabobank Arena at 7 p.m. Tonight is the popular Bright House Networks Family Night. Bring the voucher included in your recent bill to the box office and get up to four complimentary tickets to the game. And while you’re here, get 1/2 priced beer through the end of the first intermission and $1.50 hot dogs all night long.
Bakersfield Condors (Edmonton Oilers) v. San Diego Gulls (Anaheim Ducks) 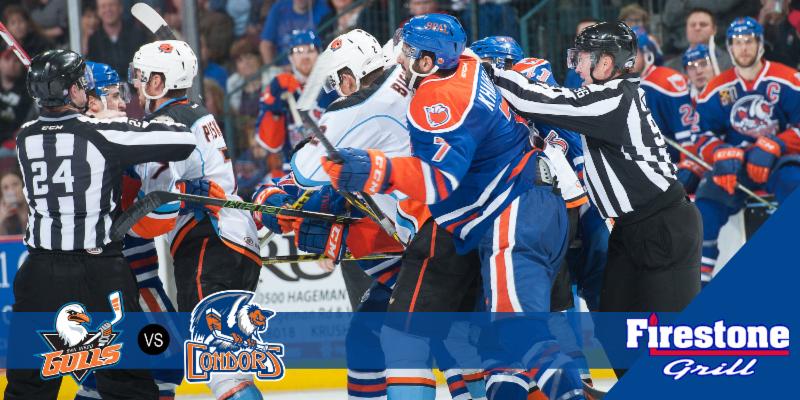 TONIGHT
The Bakersfield Condors host the San Diego Gulls for the final time in 2015-16. Overall, the Condors are 5-2-0-1 against the Gulls and own a 4-1-0-0 mark at Rabobank Arena. The final three meetings between the two sides are in San Diego.

IN CASE YOU MISSED IT
Bakersfield split a weekend set in San Jose on Saturday and Sunday. On Saturday, LW Matthew Ford scored his team-leading 22nd goal of the season in a 3-2 victory. Sunday, LW Mitch Moroz scored in his second game back from injury, but the Condors fell 4-2 for the first time in San Jose.

BOYCHUK JOINS BAKERSFIELD
The Condors received LW Zach Boychuk on loan from the Carolina Hurricanes as RW Andrew Miller was loaned by the Oilers to Charlotte (AHL). Boychuk was the all-time leader in goals, assists, points, and games played for the Checkers. The 26-year old veteran led the American Hockey League in goals with 36 in 2013-14. He is expected to make his Condors debut tonight.

PLAYOFF PICTURE
Bakersfield sits four points out of a playoff spot with a game in hand on fourth-place San Jose. San Diego paces Bakersfield by five points, with both teams having played 52 games. As it stands, four teams from the Pacific Division would make the playoffs with the fifth-placed Central Divsion team, Charlotte, being off the pace for a potential crossover position.

CONDORS NOTES
D Nick Pageau was called up yesterday with D Griffin Reinhart being summoned to Edmonton. Pageau began the season with the Condors and played 12 games with one assist… C Jujhar Khaira scored the team’s ninth shorthanded goal on Sunday. It was the fourth shorthanded marker against San Jose alone… Bakersfield plays game three of six straight against San Diego and San Jose tonight.

GULLS NOTES
D Brandon Montour leads all rookies in assists with 33… The Gulls have points in seven straight games, 5-0-1-1, and points in nine of 10, 7-1-1-1… San Diego is the second-most penalized team in the AHL at 18.29 minutes per game… The Gulls are 23-0-1-1 when scoring the first goal of the game. They are one of two AHL teams that have not lost in regulation when opening the scoring (Ontario)… The Gulls are +11 in second period goal differential, but -6 in the first period and -13 in third periods.