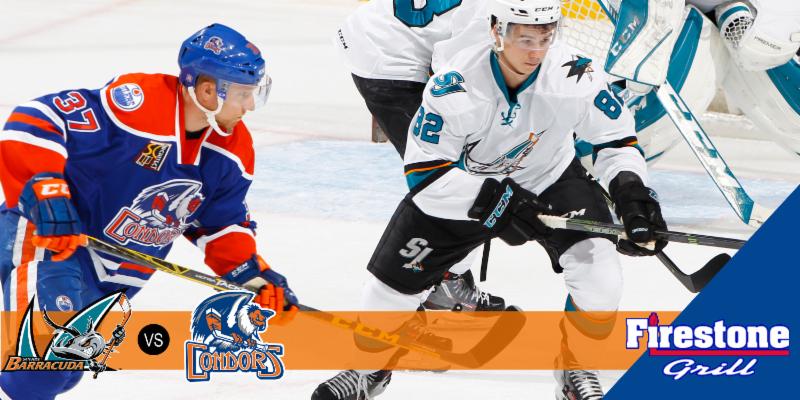 TONIGHT
The Bakersfield Condors host the San Jose Barracuda in a crucial Pacific Division matchup at Rabobank Arena. Bakersfield owns a 5-3-2-0 record against San Jose with one more meeting in Condorstown and in the season series after tonight. The Condors sit four points back of San Jose with 14 games remaining in the regular season for both teams.

IN CASE YOU MISSED IT
Bakersfield took San Diego to overtime for the second straight and for the second straight game, came out on the losing end late in the extra session. The Condors never trailed in the contest until the final shot. RW Tyler Pitlick (1g-1a), C Jujhar Khaira (1g-1a), D Dillon Simpson (2a), and D Brad Hunt (2a) each recorded multi-point nights in the 6-5 overtime loss.

After defeating the Condors at home on Sunday, 4-2, the Barracuda won their second straight on Wednesday, 4-1, in Stockton. LW John McCarthy (1g-1a) and LW Nikolay Goldobin (1g-1a) had multi-point games as G Aaron Dell returned to the lineup and stopped 30 of 31 shots.

PLAYOFF PICTURE
With 14 games left in the regular season, spots are still up for grabs in the Pacific Division. San Diego, with points in each of their last nine games, is three points clear of fourth-place San Jose. The Barracuda hold the fourth spot with 61 points followed by the Condors in fifth with 57 points. Charlotte currently has a .542 winning percentage and has won two straight.

Charlotte hosts Rockford tonight and with a win, could jump into the crossover with a San Jose loss. The Barracuda host Ontario tomorrow and the Condors can get to within two points of a playoff spot with a win tonight.

CONDORS NOTES
D Dillon Simpson was a season-high +4 last night to go along with his two-assist evening… RW Anton Slepyshev has goals in two straight games and three points (2g-1a) over that span… Bakersfield is 1-1-2-0 in the first four games of a six-game stretch of games against San Jose and San Diego… The Condors have yet to win an overtime game this season (0-5). Every other team in the AHL has at least two overtime wins… Bakersfield’s 10 shorthanded goals is tied for 3rd in the AHL with four shorthanded tallies against San Jose.

BARRACUDA NOTES
San Jose is 12-8-5-2 on the road this season… G Aaron Dell is 9th in the AHL among goalies with a 2.37 goals-against average and is 5th with a .923 save percentage… LW Nikolay Goldobin is 12th among rookies with 35 points (16g-19a)… Despite being -12 in first period scoring differential, the Barracuda are +14 and +18 in the second and third period this season.