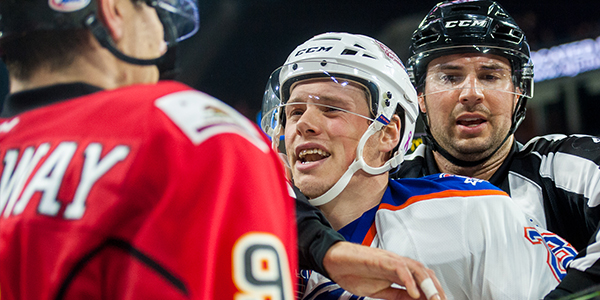 CONDORSTOWN, Calif. – The Bakersfield Condors (7-8-1-0) host the Stockton Heat (11-6-0-1) on Dignity Health Home Ice at Rabobank Arena for the team’s 14th Annual Field Trip Day at 10:30 a.m. tomorrow morning.  The game is presented by HOT 94.1 FM and Kern Schools Federal Credit Union.
Limited Club Level seats remain for those able to take lunch or play hooky from work and are available for this game at a special price of $12. Click here to purchase.

PROMOTION:
Field Trip Day – Over 8,000 students from across the City of Bakersfield, Kern County, Fresno County, and Tulare County and over 100 schools will take in an educational themed game full of videos, games, a nutritious lunch, and an educational booklet to complete when they return to their classrooms.
EAT & DRINK
DOWNLOAD THE CONDORS APP: iTunes | Google Play
TOMORROW
The Bakersfield Condors play game two of a four-game homestand at 10:30 a.m. against the Stockton Heat. Stockton has controlled the first half of the season slate, winning the opening five games in regulation.
IN CASE YOU MISSED IT
Bakersfield won its second straight and extended a home point streak to five games (3-0-2) with a 7-3 victory over the San Antonio Rampage on Saturday night. RW Patrick Russell scored twice and C Brad Malone scored the team’s third shorthanded goal of the season to unleash a record amount of teddy bears with over 10,500 collected for local non-profits. G Nick Ellis picked up his second win in a row.
Stockton split a weekend series on the road in Tucson. After a 3-2 loss last Friday, the Heat responded with a 4-2 victory on Saturday in the first start of the season for G Eddie Lack. Lack stopped 23 of 25 in his debut. C Marek Hvrik continued his hot start to the season with two goals and an assist.
STOCKTON…AGAIN
Today’s game is the sixth already this season between the Condors and Heat. The teams will meet a seventh time on Friday in Bakersfield and an eighth time on New Year’s Eve in Stockton. After that, the two sides play just two games against each other in the second half of the season. After Friday, Bakersfield will have played Stockton seven of 19 games or 36.7% of the season thus far.
CAPACITY CROWD…AGAIN
For the first time in team history, the Condors anticipate back-to-back capacity crowds. After 8,862 fans jammed into Rabobank Arena for Teddy Bear Toss Saturday, the team is prepared for over 8,000 students for Field Trip Day. With a combined total over 17,000 for the two games, it is expected to be the biggest back-to-back crowds in team history.
CONDORS NOTES
C Kyle Platzer has five points (3g-2a) in seven games since being recalled from Wichita (ECHL)… RW Zach O’Brien has three points (1g-2a) in five games since he was recalled as well… D Ryan Stanton was a season-high +4 on Saturday… The Condors connected for two power-play goals on Saturday and are now 14-for-51 (24.1%) over the past 11 games. Bakersfield has a power play goal in all but two of those games and has registered at least two power-play goals in a game five times over that stretch.
HEAT NOTES
F Andrew Mangiapane is tied for 5th in the AHL in scoring with 21 points (8g-13a) in 18 games… G Eddie Lack, who picked up his first win as a member of the Heat on Saturday, has 140 games of NHL experience with Vancouver, Carolina, and Calgary… The Heat have scored first in 15 of 18 games this season and are 10-5-0 when scoring the opening goal.