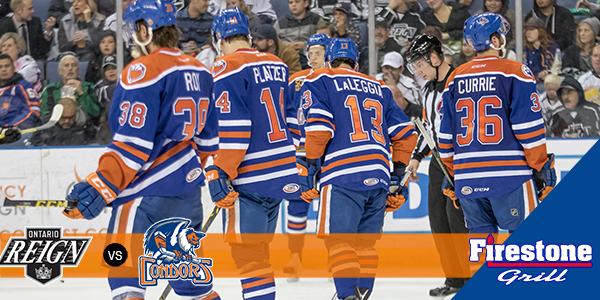 The Bakersfield Condors play their 12th and final game against the Pacific Division Champions, Ontario Reign. After taking points in five of six games against the Reign (4-1-1), the Condors have dropped three straight since March 22 for a 4-6-1 overall record.

IN CASE YOU MISSED IT
D Brad Hunt scored the lone goal for the Condors as Bakersfield had a 1-0 lead after one period in Ontario last night. The Reign responded in the second and scored three times in the third to take it 4-1. G Ty Rimmer started for the injured G Eetu Laurikainen and made 31 saves on 34 shots in the loss.

ATTENDANCE
With the final weekend home game tonight, and one game remaining on the home slate, the Condors have averaged 5,111 fans per game. It will be the first season the team has averaged over 5,000 per game since 2010-11, marking a bright start to the team’s AHL tenure.

PLAYOFF PICTURE
The picture is clear for the Condors – win and get help. Bakersfield needs to win their final four games and have San Jose (three games left) and Charlotte (four games left) lose out in regulation.

Charlotte hosts Milwaukee today while San Jose is in Cedar Park to take on the Texas Stars.

JONES MAKES DEBUT
D Caleb Jones made his Condors and professional debut last night, marking the third player to make his pro debut in three consecutive games (D Colton Waltz, RW Joey Benik). Drafted in the 4th round of the 2015 NHL Draft by Edmonton, Jones also became the first 18-year old in the 18-year history of the Condors to play for Bakersfield. He is the brother of NHL d-man Seth, and the son of 12-year NBA veteran Ronald “Popeye” Jones.

CONDORS NOTES
Bakersfield has scored power play goals in two straight games and are 3/5 over the last two games… D Brad Hunt scored his 8th power-play goal and 12th goal overall last night. His 8th PPG pulls him into a t-1st among AHL d-men in that category… The Condors have 12 shorthanded goals this season, the latest from C Josh Currie on Wednesday at San Diego. Around the AHL, only two teams have more shorthanded goals this season.

REIGN NOTES
G Peter Budaj became just the second AHL netminder in the last 50 years to win 40 games last night. He leads the league in just about every major statistical category and was named to the AHL’s first-team earlier this week… Ontario has the league’s best penalty kill, despite surrendering a goal last night on the team’s lone PK… The Reign have won three straight… LW Sean Backman is t-12th in the AHL scoring race with 55 points (21g-34a) in 65 games.