The Stanley Cup Final is here, which means that the 2-3 month gap of nothing on TV for sports, other than meaningless summer baseball, is right around the corner.

You may enjoy meaningless summer baseball, and that’s fine, but as I’ll remind you, it’s my blog and I’ll do what I want.

– Don’t want to say I told you so, but if you put your trust in the blog, you would have a shot in the Cup Final. 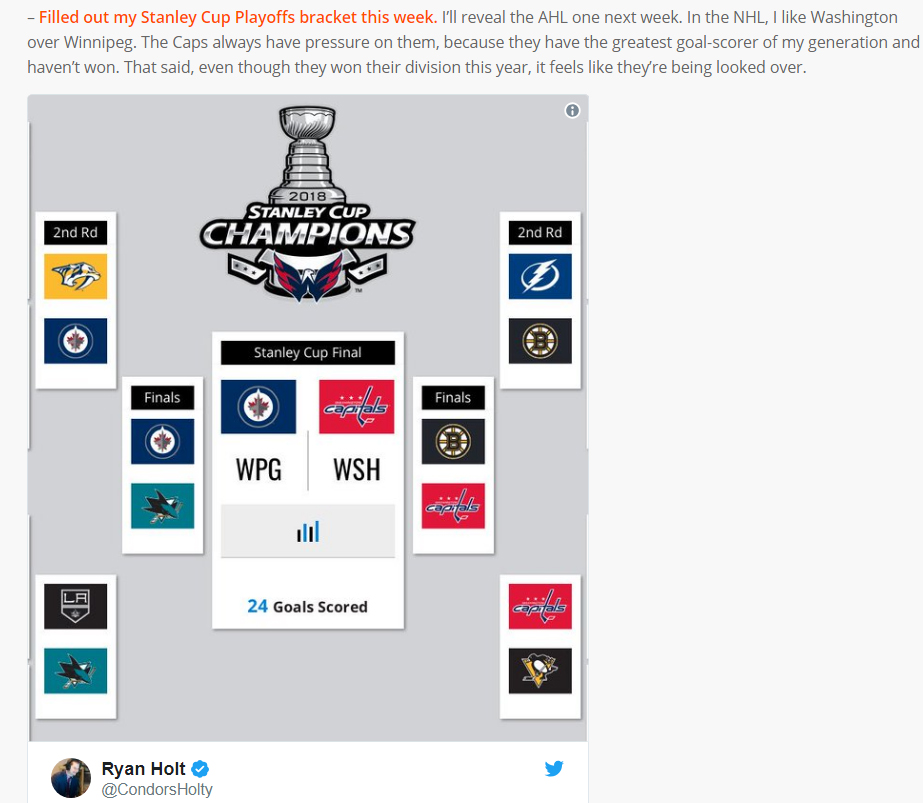 – Do you still like Washington, Holty? Yes. I’ll say Game 6 in Washington is when it ends and Alex Ovechkin is named Conn Smythe winner.

Caps 365 | For the first time since 1998, the Caps are headed to the #StanleyCup Final #ALLCAPS pic.twitter.com/CcfV43TA2H

– The “don’t touch the conference championship trophy” may have been the dumbest fake superstition in hockey.

– It’s crazy how slim the margin is, especially come playoff time. Remember, Washington was down 0-2 to Columbus and had to win Game 3 on the road in double overtime. They lose that game, and the narrative completely changes.

– Your final reminder that Jay Woodcroft will be in town next week. We’ll have full coverage on Condors.TV from his press conference on Tuesday. He will also make the rounds later in the week on morning shows. Plus, it’s supposed to be 99 on Tuesday, so it will be a nice welcome to summers in Condorstown.

A reminder to Condors365 Members to RSVP by calling 324-PUCK (7825). Look forward to seeing everyone at the Marriott to welcome Jay and family to #Condorstown! pic.twitter.com/CW7inPszwB

– Obviously, Condors365 Members have their opportunity to meet Jay and wife Jackie next Tuesday. If you have questions, fire them my way on Twitter or e-mail and we’ll make sure to address them either in my sit-down interview with Jay or during the press conference.

– Oilers prospect Stuart Skinner and the Swift Current Broncos were eliminated from the Memorial Cup. Still a very good season for him which led to his signing last week. They were eliminated by fellow prospect Cameron Hebig, who had a two-point night to advance to the semifinals.

Cameron Hebig & the @WHLPats are off to the #MCMemorialCup semis with the #Oilers prospect tallying 3 goals & 2 assists in 3 games thus far. https://t.co/0dWiyEY3tN

– Former Condors Collin Bowman and Gabriel Verpaelst are off the ECHL’s Kelly Cup Finals after a comeback Game 7 overtime win for Colorado last night. The Eagles trailed 3-1 in the third period. Gut punch for Fort Wayne. The Eagles will take on Florida, who are led by former Idaho Steelheads Head Coach Brad Ralph.

3:09 TO GO AND @ColoradoEagles JOEY RATELLE TIES IT UP! WE’VE GOT A TIED GAME 7 FOLKS! #KellyCupPlayoffs pic.twitter.com/2Ge61O0JiG

– In the AHL, both conference finals are 3-0 with Toronto and Texas poised to get to the Calder Cup. Can’t say I saw this coming, especially on the Texas end. Rockford was rolling into the conference finals, but again, overtime proving to be Texas’ best friend. In case you’re wondering, only three teams have come from 3-0 down to win a series in the 82-year history of the AHL (Rochester in 1960, Adirondack in 1989, and Wilkes-Barre/Scranton in 2013). No, I didn’t do that research myself. You can find the info here in the AHL’s morning skate.

– This week’s player feature was on Caleb Jones. In my opinion, the Condors (and Oilers organization) need him and Ethan Bear to take a step forward next season. I think they both will and I think there will be more offense from Jones in year two.

– LOCK OF THE WEEK? Again, slim pickings with not much going on and Washington already locked in. I’ll take the Red Sox to sweep the Braves this weekend in the battle of division leaders. The only thing better than meaningless May baseball is meaningless interleague May baseball. Let’s take Liverpool for the upset in Saturday’s Champions League Final too.

Ryan Holt aka Holty enters his 8th season as Voice of the Condors in 2018-19. He’s playing Kern River this weekend. Follow him on Twitter @CondorsHolty or shoot him an e-mail with questions, comments, or blog ideas to RHolt@bakersfieldcondors.com