Blog - Latest News
CONDORSTOWN, Calif. –  The Pacific Division leading Bakersfield Condors put a 17-game winning streak on the line tonight on Dignity Health Home Ice at Rabobank Arena. Only the 2011-12 Norfolk Admirals (28 straight) have ever won more consecutive AHL games in 83 years than the Condors.
Great seats start at just $12 ($13 on game day) and can be purchased by clicking here, or at the Rabobank Arena box office (opens at 10 a.m.). Save money and secure LOWER BOWL seating for tonight’s game with a Hat Trick Pack by clicking here. 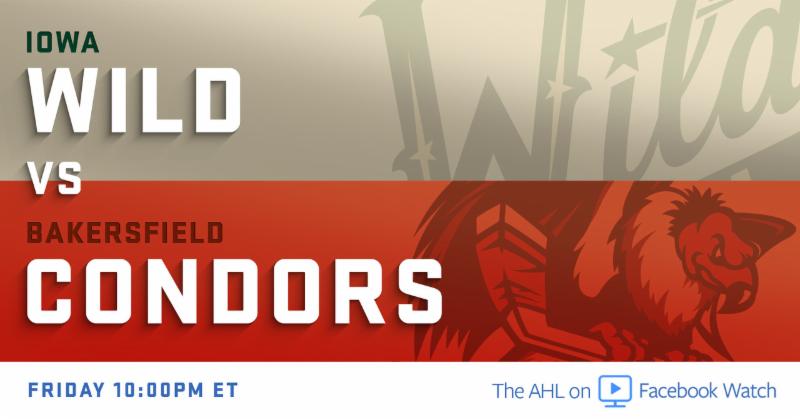 PROMOTION DETAILS: Faith and Family Night presented by Eyewitness News and LIFE 88.3 FM. All fans are encouraged post-game to hear a motivational talk with players such as C Cooper Marody and LW Joe Gambardella.

The Bakersfield Condors play host to the Iowa Wild to begin the month of March. It is the fourth and final regular season matchup of the season with the Condors picking up victories in each of the previous three contests. All-time, Bakersfield owns a 4-1-0 record against the Wild.

Bakersfield swept Tucson on the road on Saturday and Monday. After a 2-0 shutout win on Saturday, the team responded with a 3-1 victory on Monday to run their winning streak to 17 games. D William Lagesson had two assists in the win on Monday while C Cooper Marody extended his points streak to a season-high eight games (3g-6a).

Iowa dropped the opener of a four-game California road trip, 5-3 in San Jose on Tuesday. It was the first time this year the Wild lost a game when leading after two periods of play. RW Gerry Mayhew had a goal and assist in the loss.

A FEBRUARY TO REMEMBER

Bakersfield went a perfect 9-0-0 in the month of February. The team outscored its opposition 38-15 in those games, allowing more than two goals on just one occasion.

G Shane Starrett has won his last 14 decisions. His 20 wins are tied for third in the AHL, his 2.24 goals-against average is tops, and his .920 save percentage is fourth among netminders. Since January 12, he is 14-0-0 with a 1.72 GAA and .937sv% with two shutouts. His 20 wins is already the most by a Condors goaltender in a single AHL season and his three shutouts are tied for the most over the past four seasons.

The Condors, who begin the weekend with a three point lead in the Pacific Division race, have a magic number of 20 to clinch a postseason berth. That number decreases with points gained by the Condors or by the team with the highest possible total outside the playoff picture failing to gain standings points. Currently, Tucson and Colorado are tied for the final playoff berth and play each other twice this weekend.

WILD NOTES
G Kaapo Kahkonen is 13th in goals against average at 2.62… The loss on Tuesday was Iowa’s first in regulation in nine games… Iowa has been past regulation an AHL high 21 times this season… The Wild are 22-7-3-3 when scoring first… Tonight is the first of a three-in-three for the Wild who are in Ontario Saturday and Sunday.
SCOREBOARD WATCHING
San Jose (2nd) @ Ontario (7th)