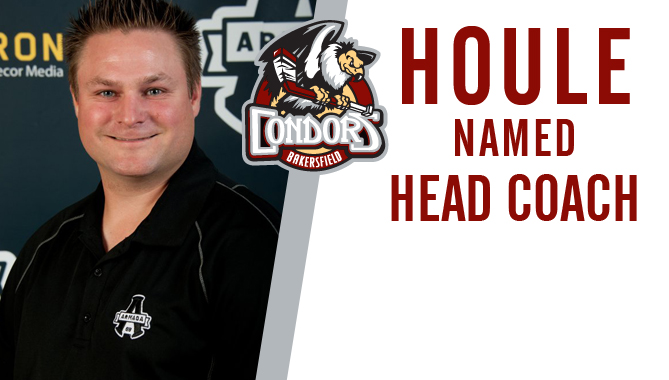 CONDORSTOWN, Calif. – The Bakersfield Condors, owned by the Edmonton Oilers, announced today that Jean-François (J.F.) Houle (OOL) has been named the sixth head coach in team history. Houle replaces Troy Mann, who was named head coach of the American Hockey League’s Hershey Bears earlier this month. Houle will be formally introduced in Bakersfield at a press conference next week.

“We are thrilled to name Jean-François Houle as the head coach of the Bakersfield Condors,” Edmonton Oilers Assistant General Manager Bill Scott said.  “After an exhaustive interview process we identified JF as the candidate we felt was best fit to lead the Condors and Oilers prospects into the future. He has an incredible knowledge of the game, strong work ethic and has the discipline to teach and mentor our players. JF has a bright future ahead of him and we are excited to have him join our organization.”

Houle, 39, has spent the last four-plus seasons as a head coach in the Quebec Major Junior Hockey

League (QMJHL) with both Lewiston and Blainville-Boisbriand. In 305 regular season games, the Quebec City, Que. native has compiled a record of 174-101-12-18, good for a .617 point percentage. That record includes four consecutive 40-win seasons.

In May, his success led to Hockey Canada naming him head coach of one of three Canadian teams at the 2014 World Under-17 Hockey Challenge, a position from which he has resigned in order to coach in Bakersfield.

“I have heard nothing but good things about the community of Bakersfield and the Condors organization,” Houle said. “My family and I are excited for the opportunity to come to Bakersfield. This is an opportunity for me to learn the ropes as a professional coach, knowing that I have a big recruiting network. I’m personable, really enjoy teaching the game and consider my communication with players as a strength. I expect my teams to work hard and I am very demanding that they have a competitive edge.”

His past three seasons have been spent in Blainville-Boisbriand where he led the Armada to back-to-back West Division titles in 2011-12 and 2012-13. The team advanced to the third round of the QMHJL playoffs in each of the last two seasons and the second round in 2011-2012.

Prior to his time with the Armada, Houle spent parts of two seasons at the helm of the Lewiston MAINEiacs from 2009-11 after taking over in December of the 2009-10 season. After getting the team in the playoffs in 2010, he them to the third round the following season before losing to eventual QMJHL and Memorial Cup Champion, St. John.

He began his coaching career at his alma mater, Clarkson University, where he served as an assistant

coach from 2003 until accepting the Lewiston position in 2010. With Clarkson, he recruited and coached numerous former Condors including 2010 captain F Shawn Wellar, F Scott Freeman, and F Nicholas Tremblay. He was instrumental in bringing 15 NHL Draft picks to Clarkson, including current Winnipeg Jets D Grant Clitsome.

As a player, Houle was drafted by the Montreal Canadiens in the fourth round (#99 overall) of the 1993 National Hockey League (NHL) Entry Draft. He went on to play four seasons at Clarkson before turning pro and playing five seasons split between the AHL and ECHL. His best season came in 1997-98 when he recorded 62 points (25g-37a) in 53 games with the ECHL’s New Orleans Brass.

Houle is the son of Réjean Houle. His father was the number one overall pick in the 1969 NHL Entry Draft by the Canadiens, played over 700 games with the club, and went on to win five Stanley Cups.

HOLTY’S BLOG: “Houle as in Cool”
Scroll to top