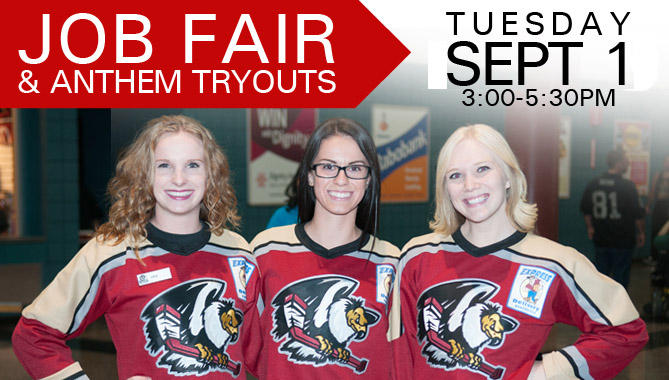 CONDORSTOWN, Calif.– The Bakersfield Condors, owned by the Edmonton Oilers, announced that the team’s annual Job Fair and Anthem Tryouts will be held exactly one week from today on Tuesday, Sept. 1 from 3-5:30 p.m. inside the Convention Center at Rabobank Arena
If you have ever wanted to work for the funnest team in all of sports (and get PAID doing it), now is your chance!

Jobs we’ll interview for:
There are hundreds of applicants, so pick up and fill out your application early.
Applicants must be at least 15 1/2 years of age with a work permit and able to work most home games to apply. Swing by the Condors front office (located at 1001 Truxtun Ave. next to the box office) during the week from 8:30 a.m. – 5 p.m. to fill out an application and get you through the process as quickly as possible. If unable to pick up an application, you will have to fill out one upon arrival before being interviewed.
If you sing in the shower and think singing in front of a few thousand rabid Condors fans is the next step in your career, email Andrew Crutcher at crutcher@bakersfieldcondors.com to schedule a time to tryout to sing the national anthem at a game. Walk-in tryouts are allowed, but appointments are strongly encouraged.
Amy Adams, former American Idol Recording Artist and singer in Las Vegas’ number one show, Le Reve – The Dream, will be on hand to judge the anthem tryouts.
BE PART OF HISTORY!! ONE STEP AWAY FROM THE NHL
Join the Condors for an historic move to the American Hockey League (AHL) in 2015-16 by becoming a Condors ticket member and enjoying all of the great perks of Condorstown. Memberships start as low as $17 / month. Click here or give us a call at 324-PUCK (7825).
https://www.bakersfieldcondors.com/wp-content/uploads/2015/08/2014_09_09_jobfair11111.jpg 380 669 condors /wp-content/uploads/2022/08/WebSite-Top-Bar-1.png condors2015-08-25 17:01:052015-08-25 17:08:44Job Fair and Anthem Tryouts