Blog - Latest News
CONDORSTOWN, Calif. – The Bakersfield Condors host the rival Stockton Heat for Los Condors Night on Dignity Health Home Ice at Rabobank Arena. Bakersfield has points in four straight games (2-0-2) and are coming off a dramatic 7-5 win in San Diego last night. The team will wear specialty LOS CONDORS jerseys tonight to benefit the Kern County Cancer Fund with a post-game jersey auction. The jersey auction will occur outside the Club Room on the concourse with a post-game meet the team party as well in the same location!
Bakersfield Condors (Edmonton Oilers) v. Stockton Heat (Calgary Flames) 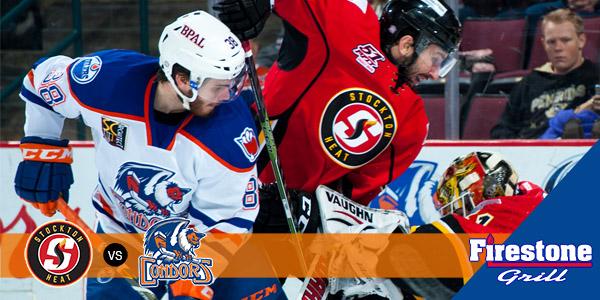 TONIGHT
The Bakersfield Condors meet the Stockton Heat for the first time in over a month. It is the 11th of 12 games between the two sides with the Condors owning a 6-4-0-0 record against the rivals from up the 99. Bakersfield has won the last two contests in the season series and are 3-1-0-0 in Bakersfield against the Heat with one more to come in April.

IN CASE YOU MISSED IT
Seven different Condors scored as the Condors ended San Diego’s 11-game unbeaten streak on the road last night, 7-5. Bakersfield jumped out to a 6-2 lead and led 6-3 with a minute left, before San Diego scored twice to cut the lead to 6-5 with 40 seconds remaining in regulation. However, LW Ryan Hamilton secured the win with an empty-net tally, his 19th of the year.

Stockton cruised to a 5-1 win on home ice last night with the return of LW Kenny Agostino and C Derek Grant. Agostino had a three-point night (1g-2a) while Grant returned from a broken jaw to record two goals. G Kevin Poulin stopped 20 of 21 shots for his 12th win of the season.

PLAYOFF PICTURE
12 games remain for the Condors in the regular season and the race for the final playoff spot in the Pacific Division could not be tighter. As of the start of Saturday, Charlotte holds the crossover position by .011 percentage points over Bakersfield. That breaks down a regulation win/loss swing. The Condors lead San Jose by .001 percentage points, but trail by one point in the standings currently. Bakersfield owns a game in hand on San Jose. Charlotte is in Milwaukee tonight while San Jose hosts Iowa. A regulation win from Bakersfield and a regulation loss from Charlotte would see the Condors spring past the Checkers.

CONDORS NOTES
D Joey LaLeggia was a season-high +5 last night and leads the Condors with a +11 rating this season… His defensive partner, D David Musil was +4… RW Anton Slepyshev has points in four straight games (2g-3a)… LW Ryan Hamilton has scored in each of the last three games… LW Matthew Ford scored his 24th goal last night. His career high is 29 when he split the 2011-12 season between Hershey and Adirondack… The seven goals scored last night matched a season-high set against Stockton on February 9 (7-3 win)… The Condors are 2-0-2 in their last four games and are 3-1-2 over their last six games.

HEAT NOTES
Stockton begins a five-game road trip tonight. They are 7-16-1-2 away from Stockton Arena this season… The Heat sit five points out of a playoff spot, but hold at least two games in hand on their closest competition… C Derek Grant is still in the top five in the league in goals with 25 despite missing the better part of two months with a broken jaw… The Heat have points in three straight (2-0-1) and are 5-4-1 over their last 10 games… LW Hunter Shinkaruk will make his series debut after being acquired in a trade with Vancouver at the NHL trade deadline.