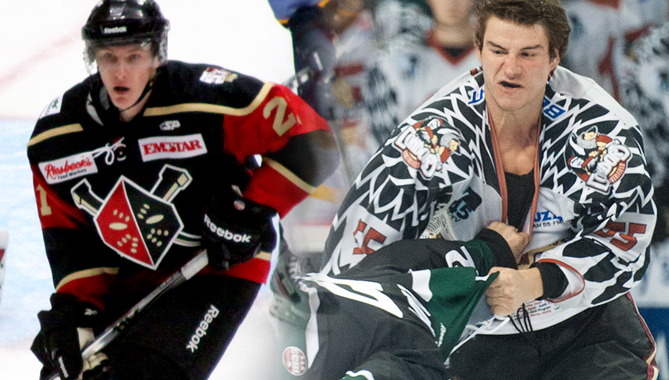 CONDORSTOWN, Calif. – The Bakersfield Condors, ECHL affiliate of the Edmonton Oilers, announced today that the team has agreed to terms with returning F Brett Lyon and second-year pro F Louke Oakley With their additions, the roster stands at 19 players (12 F, 6 D, 1 G).

“I’m looking forward to coming back and contributing at  both ends this season,” Lyon said. “Certainly, like last year, I’m not going to shy away from anything physical, because it’s important to get noticed that way. By being a physical, two-way player, I can help the team win and with Edmonton staying up-to-date on what we’re doing, it will help to know that they are watching closely.”

Troy’s Take: “The biggest compliment I can give to Brett is that when I first took the job and interviewed players from last season, his name kept coming up as a player everyone wanted back. It’s a testament to his character and how he’s viewed by the team. We wanted to increase our physical presence up front and also have a guy who can play the game, which are two things that are hard to find together.”

“(Nicholas) Tremblay had nothing but good things to say about the organization and the city last year,” Oakley said. “Last year was a tough year to turn pro with the lockout, but I enjoyed playing in Germany last season. I like to be creative on the ice, not afraid to make the pass that others might not think is there, and be poised with the puck.”

Troy’s Take: “The coaches at Clarkson raved about Louke’s skill level and speed. He had a great senior year there and was nearly a point-per-game guy in Germany last season. We’re looking forward to seeing what he can do this year.”

Best ways to use your season tickets, #55: Give to an employee who exceeded his or her duties.

PIM leader Lyon and Oakley on board
Scroll to top