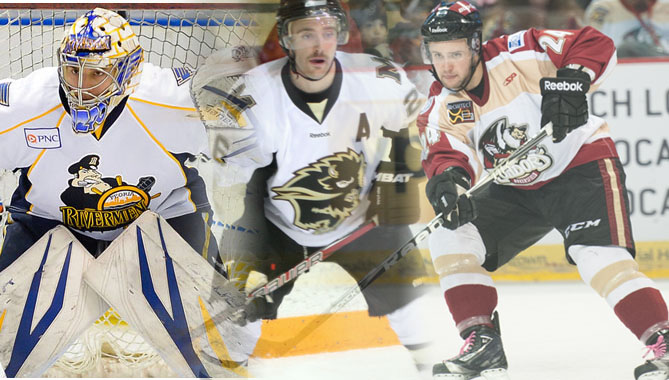 CONDORSTOWN, Calif. – The Bakersfield Condors, ECHL affiliate of the Edmonton Oilers, announced today that the team has agreed to terms with brothers D Scott and RW Blair Macaulay, along with G Paul Karpowich. The MacAulays become the second set of brothers on the roster, joining Erik and Greg Burgdoerfer. With their additions, the roster stands at 17 players (10 F, 6 D, 1 G).

Blair, 25, is the older of the two brothers and wrapped

up a successful career at the University of Manitoba in 2012-13. The Winnipeg, Manitoba native was named the CIS West’s Most Valuable Player last season, a repeat of the honor he took home in 2011-12. In the process, he became just the second player in the award’s 35-year history to win the award in consecutive seasons. He led the Bisons in scoring the past three seasons and finished his four-year career with 118 points (56g-62a) in 112 games.

“Talking to Troy and seeing his interest in me was the biggest factor in me coming to Bakersfield,” Blair said. “He understood the type of player I am and what I can bring to the ice. My brother also said it was a good town and a good place to play. It’s my first-year pro and I hope to contribute as much as possible.”

Troy’s Take: “He’s a two-time MVP who we have high hopes for this season. Skilled guy who’s grown his game this past couple of seasons and is now ready for the pro game.”

the 2012-13 campaign with Bakersfield. The right-shot blueliner played four games with the Condors and scored his first professional goal in the final game of the regular season on March 30, 2013. Scott captained Northern Michigan University each of the past two seasons and reached double digits in scoring in his final three campaigns. In 2010-11, as a sophomore, Macaulay tied for the team lead in assists with 17, claiming NMU’s Tom Laidlaw Award as the team’s Best Defenseman.

“I loved the town and the rink last season,” Scott said. “The new situation with J.O. (General Manager John Olver), the coaching staff, and the affiliation made it (Bakersfield) a good spot to come play this season.”

Troy’s Take: “He’s a puck-moving defenseman, right shot, who can hopefully play some power play for us over time. We want to have strong depth on the back end and he is certainly a kid who can add to that.”

National Hockey League Entry Draft by the St. Louis Blues. Last season, 6’2″, 192 lbs. netminder spent the majority of his time in the ECHL, appearing in 25 games for the Evansville Icemen going 7-13-2 with a 3.27 goals-against average (GAA) and a .900 save percentage (sv%). He earned a call-up and appeared in two games with the American Hockey League’s Peoria Riverman as well.

“Bakersfield looked like a good place to play with the rebuilding this offseason and opportunity to get games in net,” Karpowich said. “I talked a lot to Jake (Morley) and he said it was a great spot to play. Anytime you know some of the guys going in, it makes things more comfortable. I’m looking forward to help the team turn things around, and keep developing as a player.”

Troy’s Take: “We had a criteria going into the recruiting process, since we know we’re 99.9% sure we will get a goaltender from Edmonton, that we wanted a younger goalie, not a rookie, with some size. He comes with high credentials, and should provide some good competition in the net this season. We’re looking forward to seeing what he brings to the table.”

Best ways to use your season tickets, #35: Give to potential vendors to enhance business relationships.