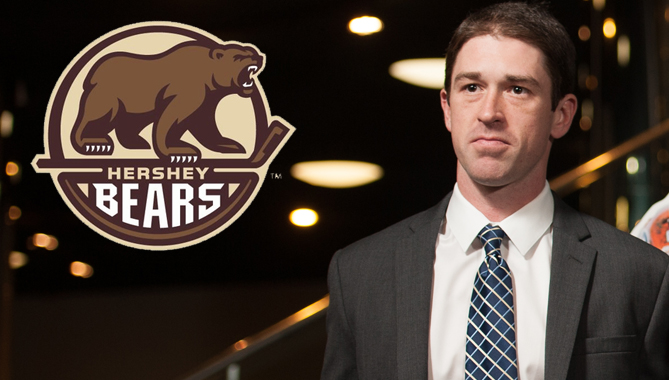 CONDORSTOWN, Calif. – The Bakersfield Condors, owned by the Edmonton Oilers, announced today that assistant coach Ryan Murphy has been hired by the Hershey Bears of the American Hockey League (AHL) for the same position. The promotion gives Murphy the opportunity to work for the top development team of the National Hockey League’s Washington Capitals.
In addition, the Condors have hired a new head athletic trainer, Vince Fedorowich of Central Valley Physical Therapy (CVPT), and a new head equipment manager, Tim Abbott for the 2014-15 season.

Murphy, 31, spent one season in Bakersfield and helped lead the team to their most successful season to date with an appearance in the Western Conference Finals.  He was instrumental in a Condors penalty kill which finished fourth in the ECHL and a defense which finished eighth in goals-against average. The Rumson, New Jersey native will be reunited with former Condors Head Coach Troy Mann and defenseman Erik Burgdoerfer.
“We want to thank Murph for his time in Condorstown and wish him the best of luck moving forward in his career,” said Condors Team President Matthew Riley. “We have a number of extremely qualified candidates we are already looking at and hope to have the position filled relatively quickly.”
NEW HOCKEY OPS STAFF
Fedorowich, MSed, ATC, LAT, of Central Valley Physical Therapy, joins the Condors as head

athletic trainer from the Abbotsford Heat (now Adirondack Flames) of the AHL where he served in the same capacity for the 2013-14 season. Prior to his time in Abbotsford, the Mississauga, Ontario native spent two seasons with the Arizona Sundogs of the Central Hockey League (CHL). He was named the CHL’s Athletic Trainer of the Year in 2013 and was runner-up for the same award in 2012. His career has also included stops in Quad City (CHL), Norfolk (AHL), and in minor-league baseball with the Greenville Drive. He graduated from Graceland University (Iowa) in 2006 and received Masters of Science in Education degree from Old Dominion University (Virg,) in 2010.
“Vince is a great fit for out team both at Central Valley Physical Therapy and with the Condors,” said Director of Physical Therapy Zach Luce. “His blend of experience, innovative thought, and teamwork is going to allow us to do great things on all fronts.”
Abbott brings over 25 years of experience at the major professional sports level to Bakersfield including serving as an associate equipment manager with the NHL Detroit Red Wings from 1992-2005. It was there where he earned three Stanley Cup Championships in 1997, 1998, and 2002. After leaving the Red Wings in 2005, the Chesterfield, Mich. native spent time with the Port Huron Flags of the United Hockey League (UHL), various indoor football league franchises, and most recently, two seasons with the Port Huron Fighting Falcons of the North American Hockey League (NAHL). Prior to joining the NHL’s Red Wings, he was the head equipment manager of the then AHL Adirondack Red Wings from 1987-1992 where he won two Calder Cup Championships.

JUMP BACK ON BOARD AND GET 50 TICKETS TO JERSEY RALLY TOWEL GIVEAWAY!
Had a Condors ticket plan in the past and looking to jump back on board? After the team’s most successful season, the Condors are giving anyone who did not have a ticket plan in 2013-14 (but was a past season ticket holder), 50 tickets to Opening Night featuring a Condors Jersey Rally Towel Giveaway, simply by purchasing a full season ticket for the upcoming season. You can even purchase a mini-plan and receive 20 tickets to Opening Night!