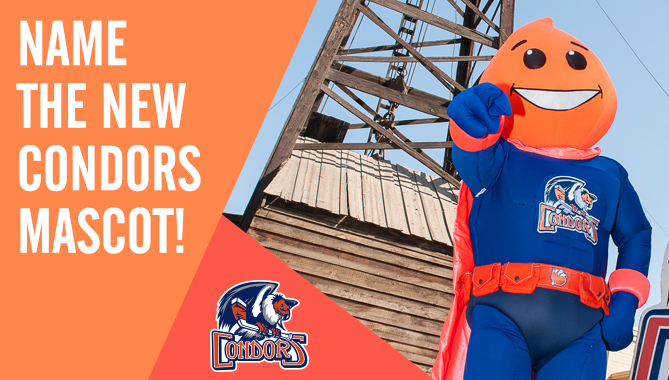 CONDORSTOWN, Calif. –  The Bakersfield Condors, owned by the Edmonton Oilers, revealed a new oil-themed, superhero mascot at the Kern County Museum earlier today. As part of the festivities, a “Name the Mascot” contest has commenced presented by Kern Citizens for Energyand Petroleum Club of Bakersfield.
WATCH: Unveiling of the Oil Drop Superhero
“The mascot provides another link between the Oilers, the community of Edmonton, and here in Kern County,” said Condors Team President Matthew Riley. “There have been tough times in the oil industry lately, and we look to our oil-themed superhero to help save the day!”
ABOUT THE NAME THE MASCOT CONTEST:
ABOUT THE MASCOT:
BE A PART OF HISTORY – OPENING WEEKEND OCT. 9 & 10
Join the Condors on their historic move to the American Hockey League in 2015-16. Become a ticket member and enjoy all of the great benefits by contacting the Condors at 324-PUCK (7825) orclick here for more information.
NHL PRESEASON GAME IN BAKERSFIELD – MONDAY, SEPT. 21
The Arizona Coyotes and Los Angeles Kings will play an NHL preseason game at Rabobank Arena on Monday, Sept. 21 at 7 p.m. Tickets are on sale now at the Rabobank Arena box office or online by clicking here.
https://www.bakersfieldcondors.com/wp-content/uploads/2015/09/2015_09_08_mascot.jpg 380 669 condors /wp-content/uploads/2022/08/WebSite-Top-Bar-1.png condors2015-09-08 12:23:312015-09-08 12:23:31Name the newest Condors mascot