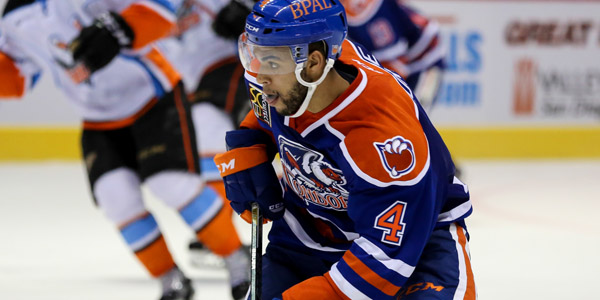 CONDORSTOWN, Calif. – The Bakersfield Condors announced today that D Darnell Nurse has been recalled by the Edmonton Oilers. Nurse played six games with the Condors, registering one assist and an even plus-minus rating. He becomes the third player to head to the National Hockey League (NHL) from the Condors this season (RW Andrew Miller, RW Iiro Pakarinen).

The Hamilton, Ontario native appeared in two games with the Oilers last season, including his first career National Hockey League game on October 14 against the Los Angeles Kings, recording two shots and 18:04 of ice time.

BECOME A CONDORS MEMBER; SAVE MONEY AND HAVE EVEN MORE FUN
Join the Condors on their historic move to the American Hockey League in 2015-16. Become a ticket member and enjoy all of the great benefits by contacting the Condors at 324-PUCK (7825) or click here for more information.