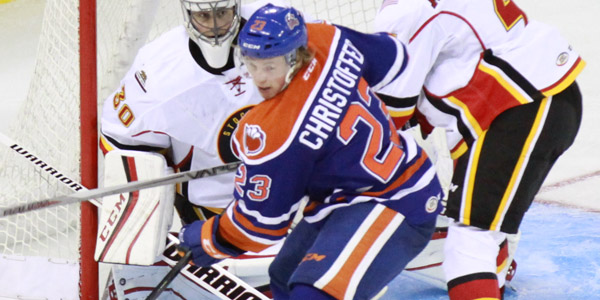 Christoffer, 21, spent the 2014-15 season with the Western Hockey League’s Regina Pats, recording 59 points (26G, 33A) and 147 penalty minutes in 72 games. He also added eight points (2G, 6A) and 12 penalty minutes in nine playoff games.
The 5’10”, 188-pound forward spent three seasons with the Regina Pats, accumulating 114 points (50G, 64A) and 368 penalty minutes in 202 career games. Christoffer also appeared in 13 career playoff games, notching nine points (2G, 7A) and 26 penalty minutes.
The Sherwood Park, Alberta native signed an AHL contract prior to attending Oilers training camp this year on an amateur tryout. He is currently with the American Hockey League’s Bakersfield Condors, where he has posted two assists in preseason play.
CONDORS OPEN REGULAR SEASON AT HOME ON FRIDAY AND SATURDAY
The wait is finally over. The Condors will open the regular season, their first in the American Hockey League, on Friday Oct. 9 and Saturday, Oct. 10. The first 5,000 fans will receive sunglasses on Friday presented by Eyewitness News, 101.5 KGFM, and Dignity Health. Then, on Saturday, the first 2,000 fans, 17 and under, can choose from nine different team footballs as part of Deflated Football Giveaway presented by Eyewitness News and Dignity Health. They include the masters of deflation, the Patriots. Call 324-PUCK (7825) for more information on how to save money.
BECOME A CONDORS MEMBER; SAVE MONEY AND HAVE EVEN MORE FUN
Join the Condors on their historic move to the American Hockey League in 2015-16. Become a ticket member and enjoy all of the great benefits by contacting the Condors at 324-PUCK (7825) orclick here for more information. Single-game tickets for Opening Weekend are on sale now at Axs.com or by clicking here.
https://www.bakersfieldcondors.com/wp-content/uploads/2015/10/Christoffer.jpg 300 600 condors /wp-content/uploads/2022/08/WebSite-Top-Bar-1.png condors2015-10-06 14:58:452015-10-06 14:58:45Oilers sign Christoffer to entry-level contract