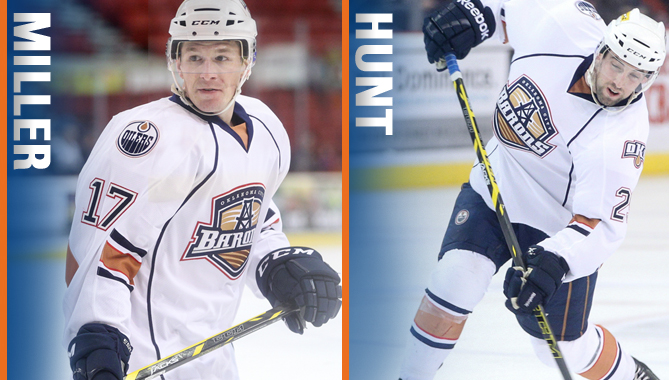 The Edmonton Oilers have agreed to terms with defenceman Brad Hunt and forward Andrew Miller on one-year contracts.

The 5’9”, 187-pound blueliner also played in 11 games with the Oilers last season, recording three points (1G, 2A), including his first career National Hockey League goal against the Vancouver Canucks on October 11th, 2014.

Miller, 26, played in 63 games with the Oklahoma City Barons last season, leading Oklahoma City in points (60) as well as goals (27) and ranked second on the team in assists (33) and plus/minus with a plus 11 rating.

The Bloomfield Hills, Michigan native also appeared in nine games with the Oilers, notching six points (1G, 5A), including two multi-point games and his first NHL goal on March 27th versus the Dallas Stars on a penalty shot. Miller became the first Oiler to score his 1st NHL goal on a penalty shot and the first player in the NHL to do so since Jay McClement did it with St. Louis on October 11th, 2005.