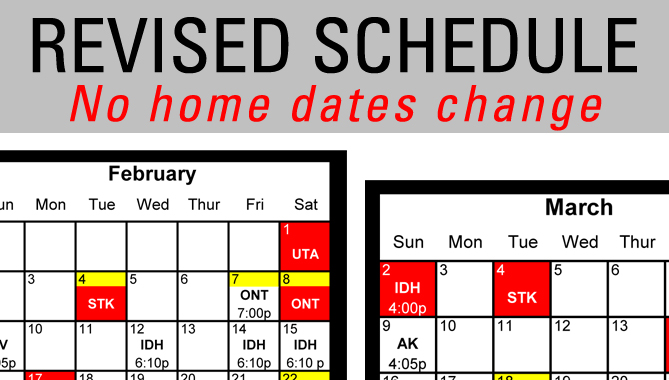 The Bakersfield Condors, ECHL affiliate of the Edmonton Oilers, announced today that the Condors opponents for several upcoming home games will change. The changes were brought about by the San Francisco Bulls ceasing operations on Monday. While some home opponents change, all home games will be played on the exact dates on the original schedule.

Bakersfield will still play 72 games (36 home/36 road) as scheduled. The team had seven (7) games scheduled against San Francisco, including four (4) at home.

Western Conference playoff seeding , Brabham Cup (top team in ECHL), and home-ice advantage in the Kelly Cup Finals will all be determined by win percentage since Alaska, Colorado, Utah, and Ontario all play 71 games under the new schedule.

Below are the alterations to the Condors 2013-14 schedule:

As previously announced, “Undie Sunday” on Sunday, April 13 at 4 p.m. will still be against the Las Vegas Wranglers.

And the three previously scheduled road games which were removed are the following:

Guarantee your receive big giveaway items by getting in the doors 15 minutes before everyone else! Become a ticket plan holder by purchasing a FUN 4-pack, which will not only give you great ticket holder perks like early entry, but will also save you more than 20% off box office prices. Click Here for more info!

Followon TwitterSubscribeto RSS Feed
I have tickets for the games that were scheduled against the Bulls….