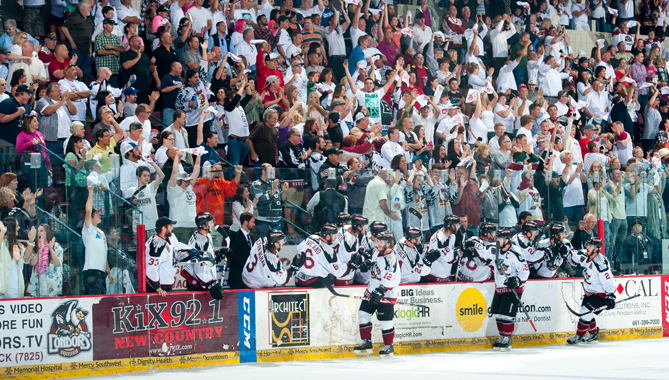 CONDORSTOWN, Calif. – The Bakersfield Condors, owned by the Edmonton Oilers, raced out to a 3-0 lead in the first period of Game 3, and held on for a 5-4 triumph over the Alaska Aces in front of a raucous 6,411 fans at Rabobank Arena Friday night.
Bakersfield now leads the series, 2-games-to-1, with Games 4 and 5 on home ice Saturday and Sunday.

$5 Margaritas for the Conference Finals next weekend!

The Condors invite everyone to cool down for Games 4 & 5 next weekend with $5 margaritas for every game. Friday, the team will hand out commemorative Western Conference Finals rally towels and everyone is asked to wear WHITE for a white out all weekend long! Tara, the super ninja cat, who saved a little Bakersfield boy and Condors fan two days ago, will drop the puck on Friday night.