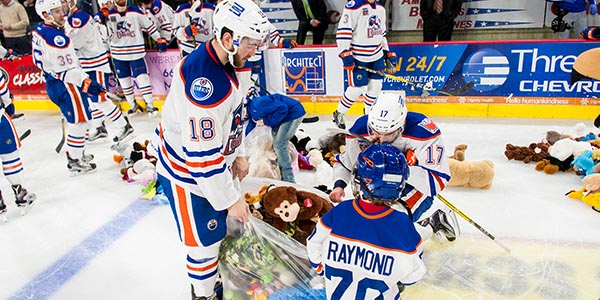 CONDORSTOWN, Calif. – The Bakersfield Condors (6-8-1-0, .433) fell to the San Diego Gulls (7-5-1-0, .577) in overtime, 3-2 Saturday night at Rabobank Arena in front of a crowd of 7,855. C Anton Lander, in his first game since being assigned from Edmonton, scored the Teddy Bear Toss goal, prompting an avalanche of stuffed animals onto the ice to be donated to United Way of Kern County.

The first weekend in December promises two exciting giveaways for the fans. On Friday the 2nd, the first 2,000 guests five and older will receive a must-have replica of Bakersfield College’s Memorial Stadium in preparation for the Outdoor Classic in January. Presented by HITS 93.1 and Bakersfield College.
Saturday the 3rd, fans will receive a Condors Christmas Stocking. In addition, one lucky fan will win the Empire Eye and LASIK Giveaway, and leave with better eyesight than when they walked in. Presented by La Preciosa 105.3 FM.

COUNTDOWN TO THE OUTDOOR CLASSIC

In 25 days, there will be ice on the turf at Bakersfield College’s Memorial Stadium. Public skating, snowman building, a zip line, inflatables… Plus, the Condors vs. the Ontario Reign, outdoors under the lights. Get the Outdoor Classic three-pack – a ticket to the Three-Way Chevrolet Condorstown Outdoor Classic pres. by Mission Bank, a ticket to the game of your choice, and a ticket to Winterfest!
Get this deal now and book your seat for three HUGE games this season. Call 324-PUCK (7825) or click here for more information.
https://www.bakersfieldcondors.com/wp-content/uploads/2016/11/2016-11-26-recap.jpg 300 600 condors /wp-content/uploads/2022/08/WebSite-Top-Bar-1.png condors2016-11-26 23:07:292016-11-26 23:18:59Teddy Bear tossing crowd sees Condors fall in OT, 3-2