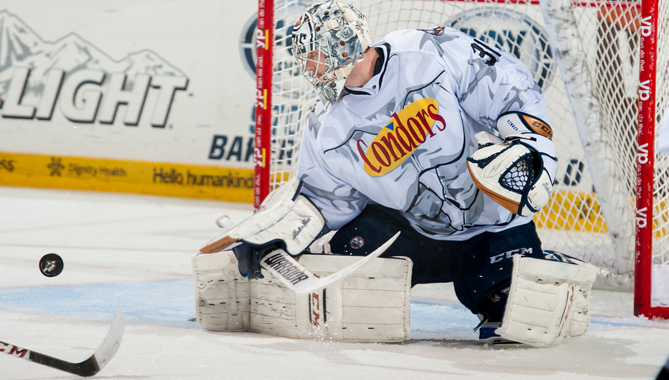 CONDORSTOWN, Calif. – The Bakersfield Condors (8-5-1-1, 18pts), owned by the Edmonton Oilers, were stymied by the Idaho Steelheads (10-3-1-0, 21pts) for the 2nd night in a row, falling 2-1 in overtime Saturday night at Rabobank Arena.
Although they lost in overtime, the Condors have earned points in five of their last six, and eight of their last 10 games. They sit three points off the Western Conference lead, held by the Steelheads.
FIRST PERIOD
SECOND PERIOD

PUFFY SHIRT JERSEYS TO GO ONLINE THIS WEEK
Several of the jerseys from tonight’s Seinfeld Puffy Shirt Jersey Night will go online over the coming weeks. Stay tuned to BakersfieldCondors.com for details, and a schedule of the auctions.

UP NEXT – FIELD TRIP DAY GAME/BUSINESSPERSON’S SPECIAL
The Condors are back on home ice Thursday morning against the Stockton Thunder in the annual Field Trip Day Game. The doors open at 9:30 a.m. and the puck drops at 10:30 a.m. A large contingent of school children is expected to pack the house Thursday. All tickets to this game in any seating level are just $10, making it also a great destination for lunch for the rest of us who have to work during the day.