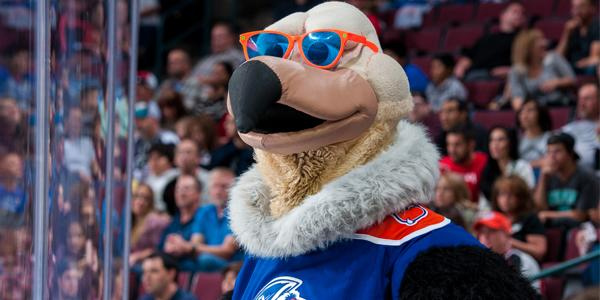 CONDORSTOWN – The leader of the Condors Army, Colonel Claw’d, requests your vote in the AHL’s Mascot Madness with voting open NOW. Click here to submit your vote. Fans may vote up to 10 times per day with prizes awarded to five lucky fans. Voting ends Wednesday.
Purchase “Oil Drops” at upcoming home games for Colonel’s Man of the Year campaign too!
Colonel Claw’d is also up for the Leukemia and Lymphoma Society’s Man of the Year award. Each dollar raised counts as one vote. Click here to donate to the cause, purchase “oil drops” at an upcoming home game, or call the Condors at 324-PUCK (7825) and ask to purchase a “Man of the Year” ticket to the game on Saturday, Apr. 9 with proceeds benefiting the LLS.
Team Cards and Bobbleheads and Alumni Tournament – THIS WEEKEND!
After Tuesday’s game in Texas, the Condors return home next weekend for two big promotions. Friday, Apr. 1 against San Jose is Team Card Set Giveaway, sponsored by My 45 KiX 92.1 and Rabobank. The first 2,000 fans 5 and older get a set of cards from the team’s inaugural AHL campaign.
Saturday, Apr. 2 the Condors host Ontario for Bobblehead Giveaway Night. The first 2,000 fans 5 and older get a bobblehead of All-Star goalie Laurent Brossoit, sponsored by Eyewitness News, 1560 AM & 97.7 FM KNZR and American Business Machines. Join us before the game for a Condors Alumni 3-on-3 tournament starting at 4:45. It’s a part of the annual Condors Fighting Cancer Hockey-Thon. Contact the Condors for more information at 324-PUCK (7825).
https://www.bakersfieldcondors.com/wp-content/uploads/2016/03/2016-03-28mascot.jpg 300 600 condors /wp-content/uploads/2022/08/WebSite-Top-Bar-1.png condors2016-03-28 15:42:012016-03-28 15:42:01Vote for Colonel Claw’d in the AHL’s Mascot Madness!!