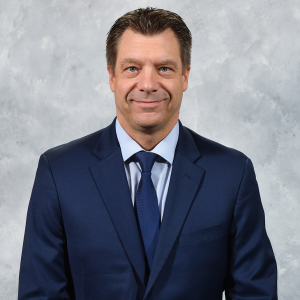 Sylvain Rodrigue began working on a full-time basis with Condors goaltenders in 2018-19, but has been with the Oilers organization for the past nine seasons.

In 2020-21 under his guidance, Stuart Skinner made his NHL debut with the Edmonton Oilers and led the AHL in victories with 20.

He helped develop rookie goaltender Shane Starrett, who was named AHL Goaltender of the Month in February and received All-Rookie and Second All-Star Team selections from the AHL in 2018-19.

Rodrigue served as a Goaltending Consultant for the DEL’s Berlin Eisbären, a member of Germany’s top elite league and Fribourg Gotteron of the Swiss Elite League prior to joining the Oilers. He won the DEL championship with Berlin in 2010-11, 2011-12 and 2012-13. He was also a member of Berlin’s European trophy championship team in 2010-11.

Before heading to Europe, Rodrigue worked with the Chicoutimi Saguenéens of the Quebec Major Junior Hockey League from 2003-2009 and was also a goaltending instructor at Hockey Canada’s Program of Excellence Goaltending Camp in 2009.