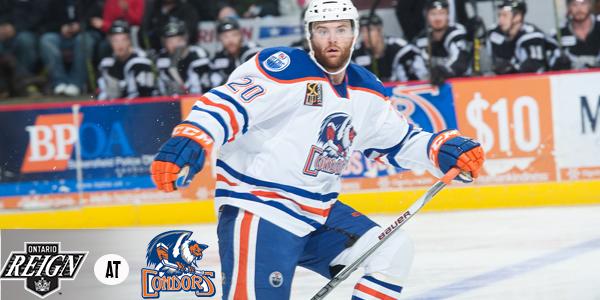 TONIGHT
The Bakersfield Condors host the Ontario Reign tonight. Both games against Ontario at Rabobank Arena this season ended in shutouts – a 5-0 win for the Reign Opening Weekend and a 3-0 win for the Condors on Nov. 14. The Reign are the affiliate of the LA Kings, relocated from Manchester (NH) over the summer. The Manchester Monarchs won the AHL title last season.

IN CASE YOU MISSED IT
F Marco Roy scored a power play goal in the first period to tie up the contest, but the San Antonio Rampage shut down the Condors offense the rest of the way and escaped with a 3-1 win Friday night at Rabobank Arena.

The Reign jumped out to a 3-0 lead on the Stockton Heat last night on home ice, and scored three times in the third to cruise to a 6-1 win. Ontario went 2-4 on the power play and RW Sean Backman had a three-point night (1g-2a). G Peter Budaj picked up his 18th win of the season as the Reign extended their lead in the Pacific Division to .100 in win pct.

CONDORS NOTES
C Jujhar Khaira returned to the Condors lineup yesterday and picked up an assist. He had missed the last 14 games while enjoying his first stint in the NHL with Edmonton… RW Matthew Ford had his team season-high seven-game point streak snapped Friday night. He remains one of the hottest scorers in the AHL, with his 15 goals sitting just two shy the league lead…

ONTARIO NOTES
The Reign have been atop the Pacific Division since the commencement of the 2015-16 season. After dropping three straight around the New Year, the Reign have won their last two contests, including a 6-1 triumph last night at home over Stockton… RW Sean Backman leads the Reign with 26 points and is tied for the league lead with four game-winning goals… Veteran NHL G Peter Budaj is the league leader with 18 wins, four shutouts and a 1.66 goals against average.