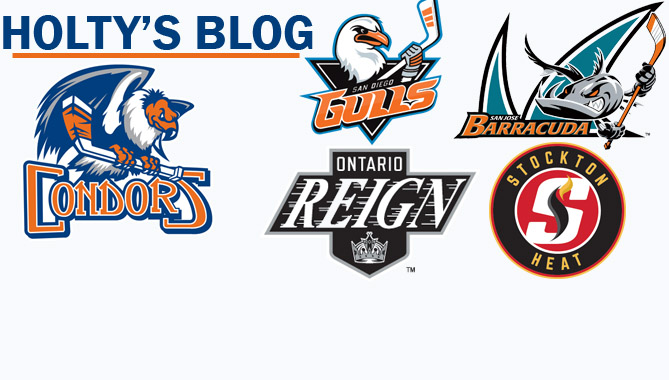 In my best Jim Gaffigan voice, “I can’t believe I’m writing a blog on my birthday.”

Last year’s birthday was spent “up the 99,” so naturally, this birthday is already off to a better start.

It’s true, I’m getting old folks. Friend of the blog @KevinBartl hates most things associated with birthdays, including his own. We’re actually not sure when he was born. That said, he’s always the first person in line to grab a cupcake or piece of cake.

Speaking of which, you get to choose a delectable item you would like the office to have from our friends at Smith’s Bakery … I always go with the Champagne Cupcakes. They’re the best.

Earlier this week @Condors tweeted this out…

If you’re wondering who you should root for in the late game tonight: Calgary = Stockton. Problem solved.

Someone replied that the Ducks = San Diego and that’s just as bad.

And Anaheim= San Diego can they both lose? https://t.co/fals0OP3Uu

So that got me thinking. Of the four teams out in AHL California next season, who is the Condors rival? I like lists, so I listed them. In order. Most hated to least hated. Now granted, you’re probably going to see a lot of each team, so this could change, but I think it’s a good starting point. In any art of war manual, it’s important to only fight on one front. You start getting spread too thin, and that’s where you lose.

P.S. Good luck to the Oklahoma City Barons tonight as they open up their second round series with Utica. Utica is to New York as that city up the 99 is to California.

Ryan Holt enters his fifth season in Condorstown in 2015-16. He just turned 27. Follow him on Twitter @Condors or e-mail him rholt@bakersfieldcondors.com for any future blog ideas.