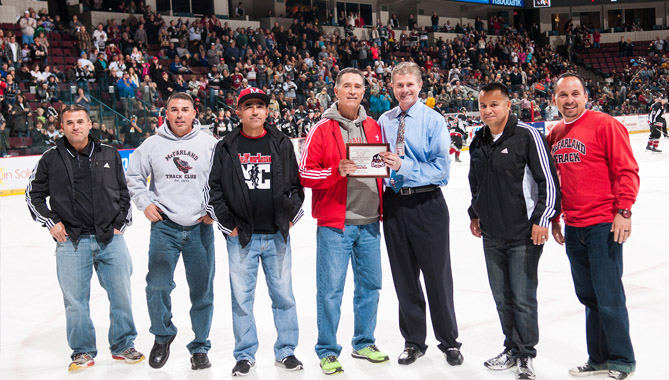 The Condors honored one of the greatest Kern County sports stories in recent memory, immortalized in the hit Disney movie McFarland USA in theaters now. in 1987, the McFarland Cross Country team became the first-ever true California state champions after the program was founded in 1980. Under the direction of head coach Jim White, who was portrayed by Kevin Costner in the film, the team went on to win 22 league championships, 15 sectional championships, and nine state titles in 24 years. They are a true inspiration to Kern County and to the hard work of this area.

On ice were Head Coach Jim White, Damacio Diaz, Danny Diaz,  David Diaz, Johnny Samaniego, and Thomas Valles, and they were honored with the Spirit of Condorstown Award!