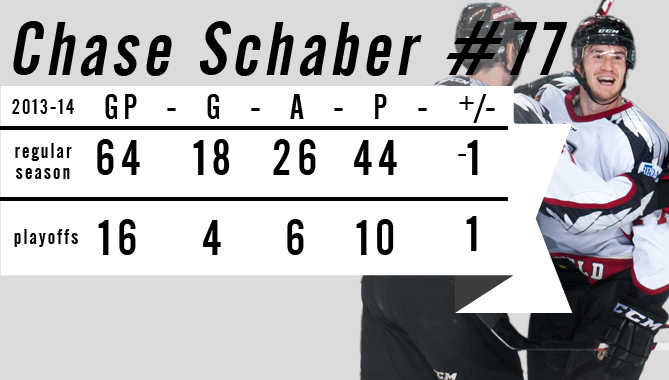 Chase Schaber made an impact during his rookie season in the pro ranks, and it started on Opening Night when he scored the first goal of the season for the Condors.

The Red Deer, Alberta native finished the 2013-14 season as the third highest scorer on the team, with 44 points. Only two players had more than his 18 goals on the season, and with 26 assists, he provided a balanced offensive presence. He recorded 10 multi-point games on the season, including a show-stopping four-goal game on April Fools Day in Las Vegas – the first for the Condors in six years.

Although it was his first professional regular season, it was Schaber’s second lengthy playoff run, after joining Idaho for the playoffs in 2012-13, and it showed. He set Condors rookie records for assists (6) and points (10) in a post-season, and tied Alexandre Bolduc’s rookie mark with four goals, while finishing fourth on the team in playoff points. At 23 years old, Schaber has already played 33 career playoff games in the ECHL.