Surreal. That’s the best word I could come up with when asked on The Greg Kerr Show last week about what life’s been like the past week.

There are a lot of questions and seemingly, ever-changing answers hourly.

That said, the Condors got on a plane last Wednesday expecting to play hockey. What transpired was surreal.

It’s my blog and I’ll do what I want.

WEDNESDAY, MARCH 11 (times are local to where the event occurred)

11 a.m. – The Condors head to Meadows Field to begin the journey to Grand Rapids, Michigan. It’s the team’s longest flight of the year and are one of only a couple teams set to hit the air for games that weekend. There’s 33 of us. We take up most of the puddle jumper to Phoenix.

2 p.m. – Team arrives at Phoenix’s Sky Harbor after leg one of the trip. Luke Esposito, who played in Grand Rapids and has a significant amount of family & friends headed to West Michigan, asked me if we’d actually play games this weekend. I gave it no thought and replied “of course.” The only caveat to that would be if a player, team member, or other in a professional sport contracted the virus.

4 p.m. – Condors board a flight to Grand Rapids.

6 p.m. – Keegan Lowe, who was sitting in front of me, turns around to show me his phone. It’s a tweet showing the suspension of the Utah Jazz / OKC Thunder game because of a player believed to have contracted the virus. It was at that moment we all realized that we wouldn’t be landing into the same world we started the day in. The rest of the flight felt weird. With the NBA suspending, the underlying current was that there was no way we were hitting the ice. It was weird.

10:30 p.m. – Team lands at Gerald Ford in Grand Rapids. A short bus ride off to the hotel. Few of us straggle out in downtown GR looking for a bite to eat and find it at Buffalo Wild Wings.

8 a.m. – I’m a morning guy, especially with a non-game day on the road. Breakfast also happens to be my favorite meal. Condors have a practice scheduled for 2:30 p.m. and a team meal scheduled for 6 p.m. NHL and AHL have executive calls after noon as well. 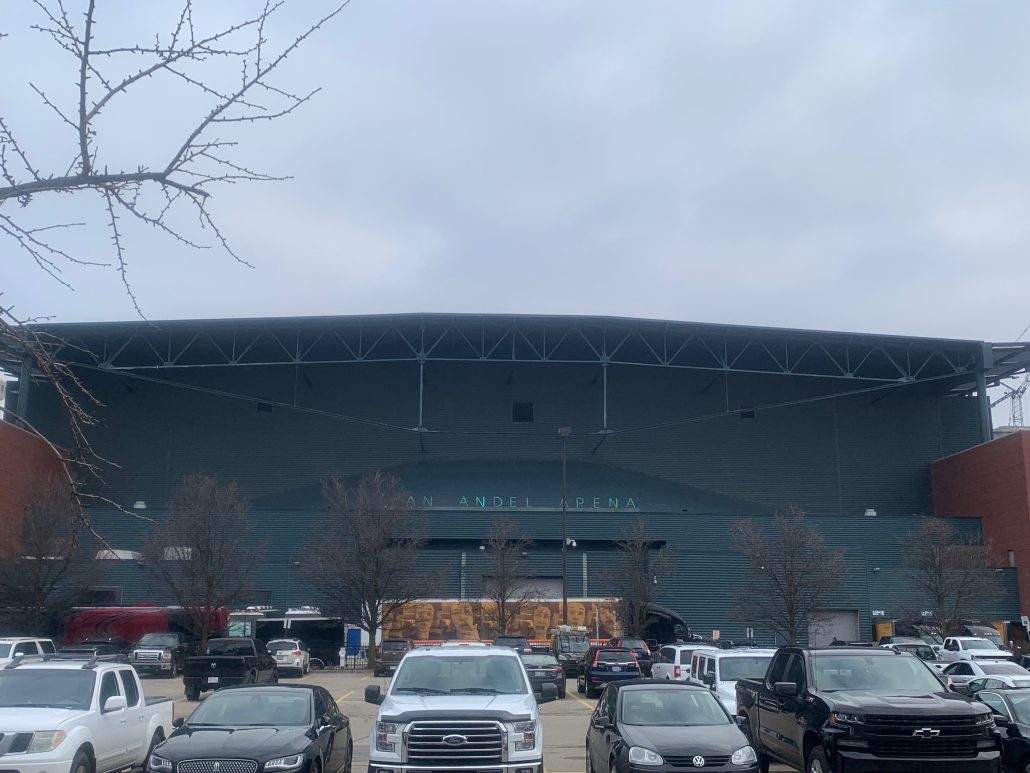 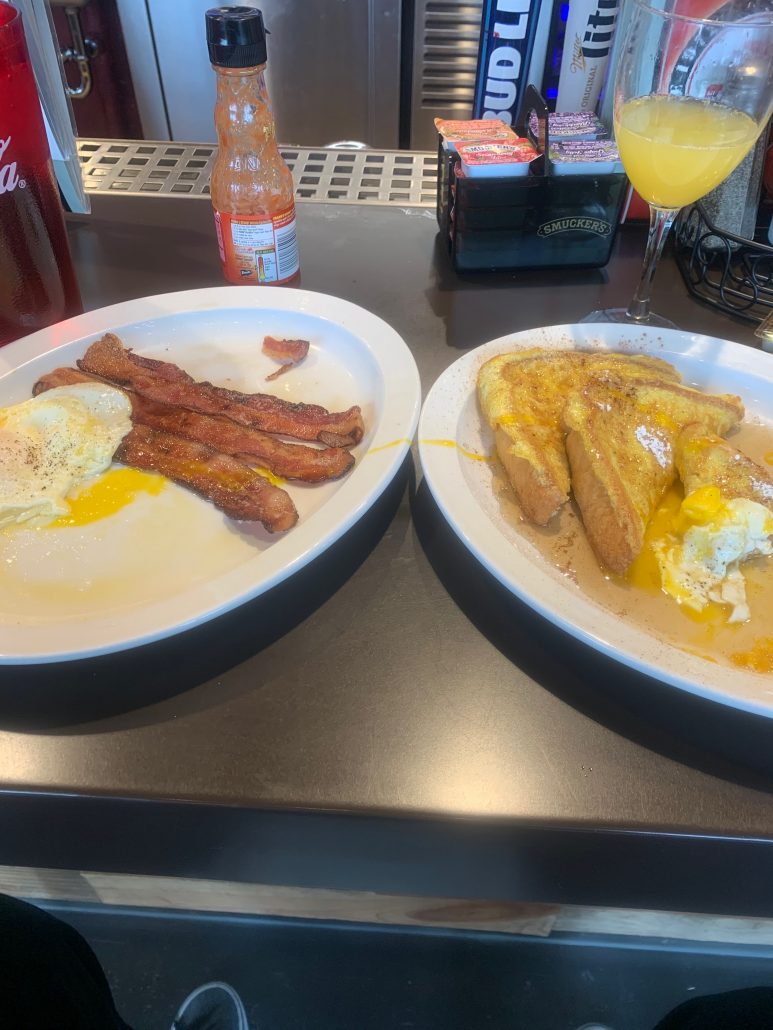 8:20 a.m. – A quick walk around downtown GR and into “Leo’s Coney Island On Tap.” After plopping down, a familiar face is nearby in former Condors winger Matt Ford. Felt like old times when it would usually be us with Ryan Hamilton having breakfast and them reading the news and doing crosswords. We catch up. Chat about what’s to come and how strange everything seems. He and his wife Cassie recently welcomed their second son. They’re all doing well.

French toast, a couple eggs, and some crispy bacon did the trick.

Noon – Condors Equipment Manager Al Oman leads the crew to the rink to meet up with the gear that was shipped cross country. We’re talking roughly 90 bags and he ensures everything gets there in one piece. He’s also never had a bad day at the rink, which if you know equipment managers, isn’t always the case.

1 p.m. – The Condors load up the bus to head to Griff’s Ice House for a scheduled practice. It felt like youth hockey walking in with air hockey, arcade games, and concession stands. Head Coach Jay Woodcroft gathers the group next to the air hockey table and informs them practice will be delayed while they wait for information. Strength Coach Brian Ganz digs out a soccer ball and other items for the team to stretch out and kick around.

Condors are delaying practice in Grand Rapids and awaiting word on any further decision.

2 p.m. – the team gathers at J. Gardella’s for lunch and to watch the only sport still going, The Players. Most catch me on the laptop with my trusty PR assistant, Brad Malone. The end is near.

3 p.m. – The music stops as we officially bring the season to a screeching halt. A staff meeting and some radio interviews take place. No games for the weekend and seemingly for the foreseeable future.

4 p.m. – There’s one guy who wasn’t with us as a group – “video coordinator” Sam Kim. That’s because he was furiously scrambling to get 33 of us back home safely. His title doesn’t fit his job. It encompasses so much more.

I’ll be honest. I thought there was no way we could possibly get back home before Saturday at the earliest. And even then, I thought it would be virtually impossible without some sort of cannonball run on a few flights, busses, and the like.

5 p.m. – Sam has boarding passes, itineraries, and everything ready for a flight to LAX from Chicago the next morning. That’s a massive undertaking. He got 33 of us on the same flight and scheduled to be back in Bakersfield by 11 p.m. In less than three hours, the AHL suspended the season, and he had us re-booked (for cheaper by the way!) on the same flight for the next day. Job well done.

6 p.m. – 9 p.m. – Following a fun afternoon together, the team waltzes nearby to the team dinner at Leo’s Seafood. Apparently Leo had the market cornered on establishments in GR. There’s laughs, stories, and some great food. Again, set up by Sam, who has now joined us. Certainly a feeling this might be the last meal we all share together. It’s a big part of the “team” and everyone made sure to enjoy it. JF Houle recommended the Walleye and it was delicious. 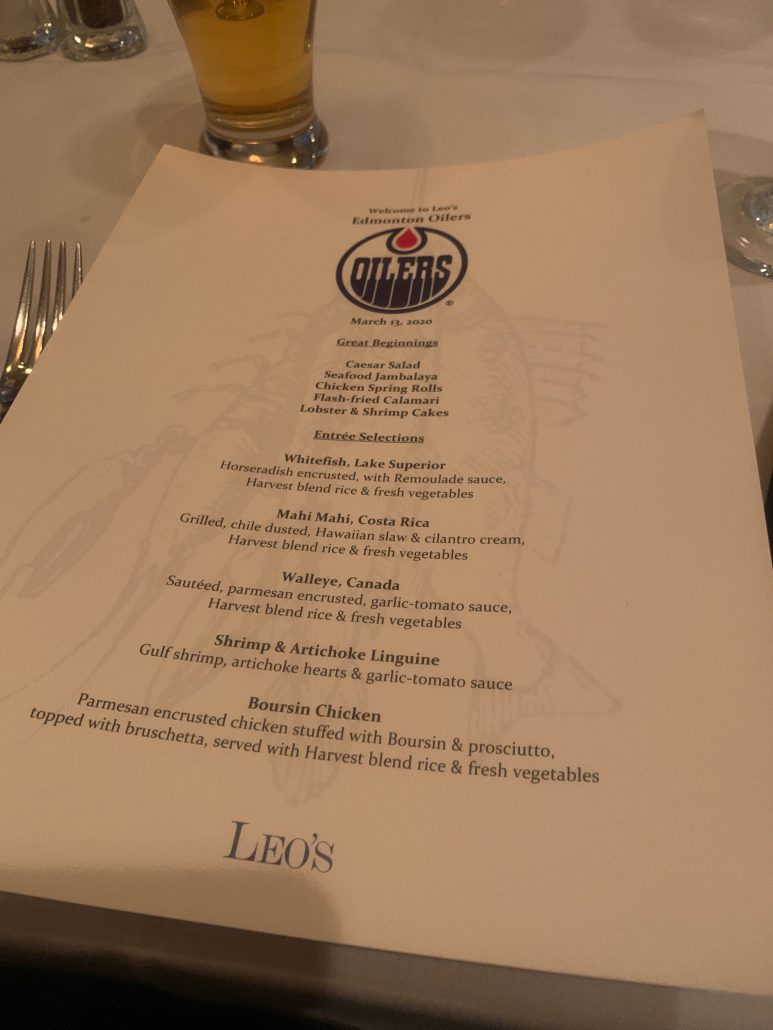 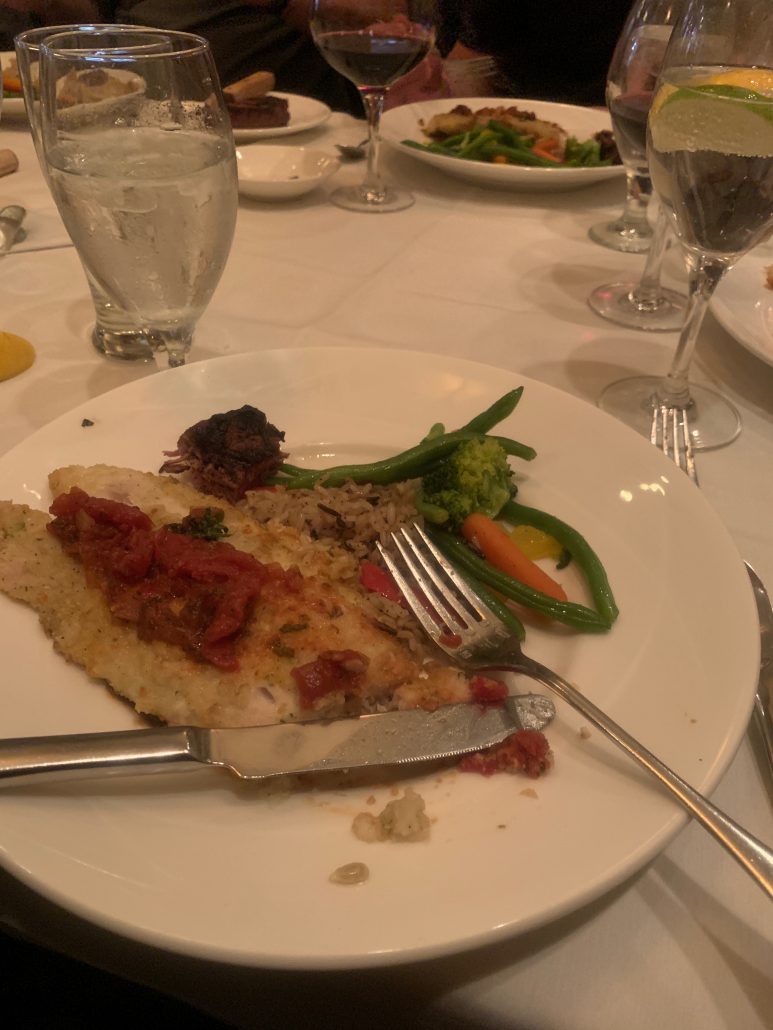 11 a.m. – Pre-game meal (or at least what was going to be pre-game) is set up for the team to grab a bite before we get on the bus.

11:30 a.m. – With extra snacks, the team gets on the bus for a 3-hour bus ride to Chicago. Animal House is the movie of choice while some play cards, some sleep, and others watch intently. I forgot how funny that movie is. Not sure if many of the younger players had ever even heard of it.

3 p.m. – After a smooth trip through security, myself and athletic trainer Chad Drown walk towards the terminal when in a group of teenage girls, one all of a sudden collapses. Chad, being the professional he is, immediately assessed the situation and took charge. Thankfully, though scary, the girl was just having a panic/anxiety attack, and Chad was able to get her through the situation.

8 p.m. – Condors arrive at LAX. Usual chaos for that place. Nothing out of the ordinary. Reuben, the team’s trusty bus driver, pulls around to begin the final trek. He’s a welcomed sight. He’s a part of the team.

10:30 p.m. – Bus arrives home in Condorstown. The team disperses, not quite sure what happens next.

I don’t know what happens from here. Surely this blog will be outdated by the end of the week (day? hour?) These are unchartered waters for life and all involved. Answers will become clear at some point.

Live your life. Be safe. Wash your hands.

Ryan Holt aka Holty is the Voice of the Condors and just suspended his ninth season in Bakersfield. Follow him on Twitter @CondorsHolty.