Blog - Latest News
WINNIPEG – The Bakersfield Condors (1-1-0, .500) could not hold on to a third period lead and fell 5-4 to the Manitoba Moose (2-1-1, ..550)  on Thursday night at MTS Centre. Bakersfield split the two-game set and opens the home slate on Saturday at 6 p.m. against the Tucson Roadrunners. 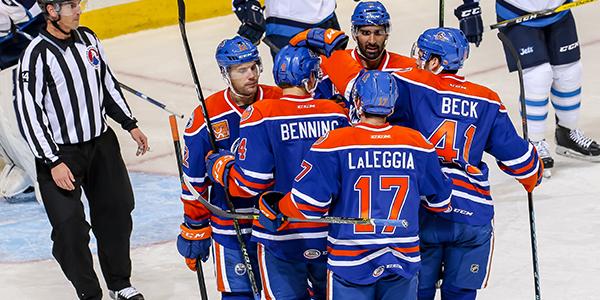 FIRST PERIOD
SECOND PERIOD
THIRD PERIOD
GAME NOTES
CONDORS HOME OPENER ON SATURDAY @ 6 P.M.
The Condors wrap the series with the Moose on Thursday at 5 p.m. Bakersfield plays their home opener on Saturday at 6 p.m. against the Tucson Roadrunners. The first 5,000 fans will receive a Condors retro cap courtesy of Eyewitness News, 98.5 The Fox, and Rabobank. From 4-6 p.m. enjoy a Party on the Plaza BBQ courtesy of Rabobank with food and fun!