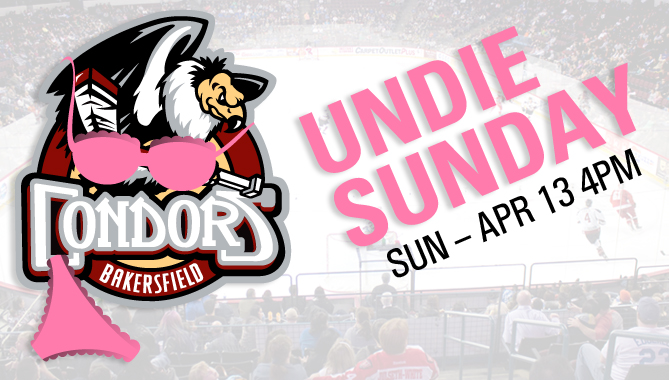 CONDORSTOWN, Calif. – The Bakersfield Condors, ECHL affiliate of the Edmonton Oilers, announced today the game originally scheduled on Saturday, Dec. 7 against Las Vegas will be made up on Sunday, April 13 at 4 p.m. for the team’s first-ever “Undie Sunday.”

When the team scores their first goal, similar to Teddy Bear Toss, fans are encouraged to chuck their underwear (new, please!) onto the ice for donation to charity.

“In talking with local non-profits, it is quite clear that there is a need of undergarments for the economically challenged,” Condors Team President Matthew Riley said. “We thought this would be a fun way to bring attention to that fact, and hopefully raise some significant donations. Who doesn’t like to throw things on the ice? Teddy Bear Toss is obviously a great tradition, so why not start another one?”