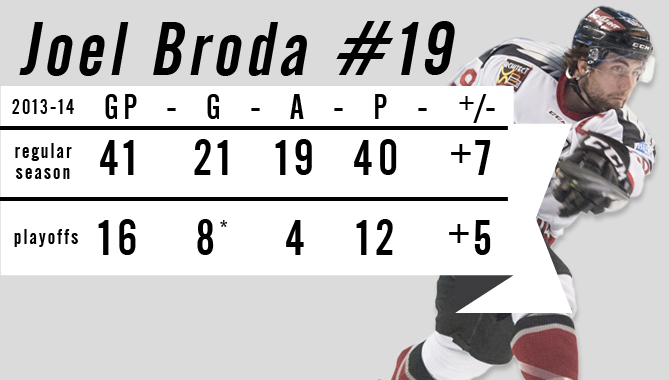 Joel Broda returned to Condorstown in 2013-14 for his second stint in Bakersfield and this time, with the captain “C” on his chest. After beginning the season with Bakersfield’s AHL affiliate in Oklahoma City, the 24-year old returned to Bakersfield with an attitude set on turning the team’s fortunes around. He did just that.

Scoring goals in three of his first four games back with the Condors, Broda showed why he could be one of the most dangerous players in the ECHL. He finished November with nine points (5g-4a) in 10 games, followed that in December with 12 points (6g-6a) in nine games and impressed in January with 14 points (8g-6a) in 11 games. For his efforts, he was named ECHL Player of the Week on Jan. 21 with 4g-3a= 7 pts in a 3-0-1 week for the Condors.

Then, in mid-February he was called up again to the AHL, this time to Bridgeport, where he played the majority of the rest of the season. However, with the Sound Tigers out of a playoff spot, Broda insisted on coming back to Bakersfield to help lead his squad to their first postseason in three years.

Broda finished second on the team in playoff scoring with 12 points (8g-4a), first in goals, in 16 games. Three of those goals were game-winners, including an overtime goal in Game 3 of the first round against Utah to lift the Condors to a 2-1 series lead. He notched five points in Games 4 & 5 alone against Stockton to propel two comeback victories and send the Condors to the Conference Finals for the first time in team history.

The eight goals he potted was a Condors single-postseason record.