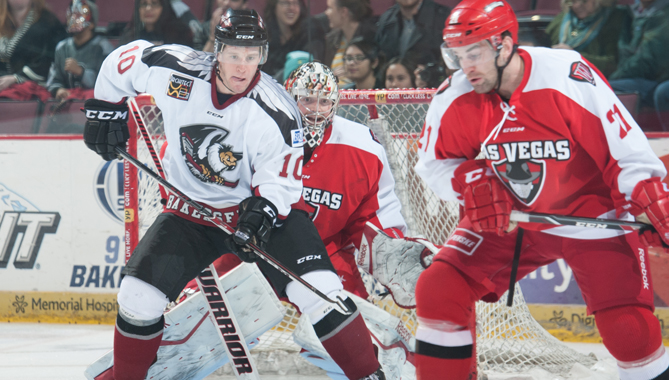 LAS VEGAS – G Laurent Brossoit did it again, stopping all 17 shots he faced for his second straight shutout as the Bakersfield Condors (12-15-0-1, 25pts) moved to within a point of sixth place with a 3-0 win over the Las Vegas Wranglers (8-18-3-0, 19pts) on Wednesday afternoon at Orleans Arena. C Joel Broda potted two goals to help the Condors to their fourth win a row.

1st Period
2nd Period
3rd Period
Condors droppings:
NEXT HOME GAME
Saturday, Jan. 11 vs. Las Vegas
TIP-A-CONDOR – TUES. JANUARY 28
Tickets are on sale now for one of the most anticipated nights of the season, Tip A Condor. This year’s event returns to Firehouse, located at 7701 White Lane, on Tues. January 28 from 5-8 p.m. Every year Condors players trade their hockey gear in and become waiters, all in the name of a good cause. There will be tremendous auction items available to bid on and fans can interact with the players playing games, taking pictures, and more as the guys collect tips for the Kern County Shrine Club. Tickets are $25 and are on sale now. Click here

Choose four upcoming games and save over 20% on box office ticket prices with a Condors Holiday 4-Pack. These 4-Packs make great stocking stuffers and are the perfect give for the person in your life who likes to have FUN!! (They are also perfect for the person that you want to take you to Condors games….)

During the last game, who was wearing the #55 jersey with no name on it?
Scroll to top