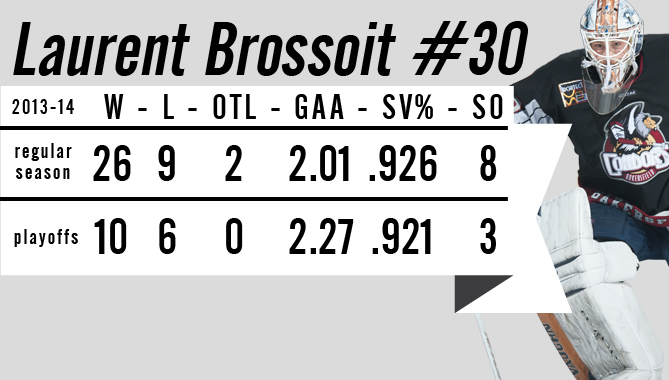 Laurent Brossoit burst on to the scene in Condorstown following a trade between the Edmonton Oilers and Calgary Flames and went on to have a rookie season for the record books.

Let his regular season numbers against his counterparts around the ECHL soak in first:

All of this while he made stops and suited up for five different teams in 2013-14. Alaska, Abbotsford, Oklahoma City, Edmonton, and msot notably, Bakersfield.

I couldn’t have asked for a better experience in my first year pro! Going to miss you Condorstown. Thanks for your support.

The rookie from BC became a hit in Condorstown not only for his stellar play on the ice, but his personal & humble demeanor outside the 200 X 85 surface exemplified by the above tweet.

“LB” was named the to the ECHL All-Rookie Team, the All-ECHL Second Team, and finished runner-up in both Goaltender of the Year and Rookie of the Year voting. He tied the ECHL single-season record with eight shutouts, including tying the mark of shutouts in three consecutive games on Dec. 18. His 211:17 shutout streak during that time, ranks fourth in league history.

During the playoffs, Brossoit became the Condors workhorse, helping lead the squad to parts previously unknown and the Conference Finals. He went 10-6 in his first pro playoff run, and amassed a league-high three shutouts in the postseason. He faced the second most shots of any goaltender and had the second-most wins of any netminder.

He holds just about every goaltending postseason record in Condors history, and in some cases, shattering previous marks.

Without question, he is one to watch for the future and will be someone that Condorstown keeps tabs on long after the chants of “LB” leave Rabobank Arena.